About 225 employees at Google and its parent company Alphabet are the first dues-paying members of the Alphabet Workers Union.

SAN FRANCISCO - A group of Google engineers and other workers announced Monday they have formed a union, creating a rare foothold for labor organizers in the tech industry.

About 225 employees at Google and its parent company Alphabet are the first dues-paying members of the new union, called Alphabet Workers Union. They represent a fraction of Alphabet’s workforce, far short of the threshold needed to get formal recognition as a collective bargaining group in the U.S.

Its members say they want more of a voice not just on wages, benefits and protections against discrimination and harassment, but also broader ethical questions about how Google pursues its business ventures.

"For far too long, thousands of us at Google — and other subsidiaries of Alphabet, Google’s parent company — have had our workplace concerns dismissed by executives," engineers Parul Koul and Chewy Shaw wrote in an op-ed published in the New York Times. "Our bosses ... have developed artificial intelligence technology for use by the Department of Defense and profited from ads by a hate group. They have failed to make the changes necessary to meaningfully address our retention issues with people of color."

The union was organized in secret for almost a year and elected its leadership in December, according to the New York Times. It will be affiliated with the larger Communication Workers of America. 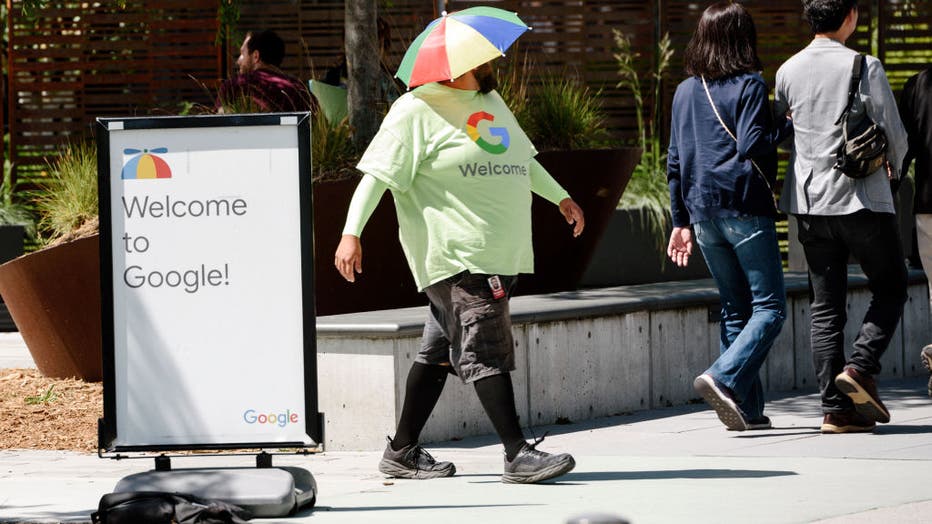 A Google employee wears a colorful hat on the Google campus as Google workers inside hold a sit-in to protest sexual harassment at the company, on May 1, 2019 in Mountain View, California. (Photo by Michael Short/Getty Images)

The engineers also accused Alphabet of cracking down "on those who dare to speak out," and said the company continues to "keep workers from speaking on sensitive and publicly important topics, like antitrust and monopoly power."

"For a handful of wealthy executives, this discrimination and unethical working environment are working as intended, at the cost of workers with less institutional power, especially Black, brown, queer, trans, disabled, and women workers," Koul and Shaw wrote. "Each time workers organize to demand change, Alphabet’s executives make token promises, doing the bare minimum in the hopes of placating workers."

The unionization campaign is the latest signal from employees who don't believe the company is living up to its professed ideals, as expressed in its original "Don’t be evil" slogan.

Google said Monday that it has tried to create a supportive and rewarding workplace, but suggested it won't be negotiating directly with the union.

"Of course our employees have protected labor rights that we support," said a statement from Kara Silverstein, the company's director of people operations. "But as we’ve always done, we’ll continue engaging directly with all our employees."

Unionization campaigns haven’t historically been able to gain much traction among tech workers, who get hefty salaries and other perks like free food and shuttle rides to work. But workplace activism at Google and other big tech firms has grown in recent years as employees call for better handling of sexual harassment and discrimination and avoiding harmful uses of the products they’re helping to build and sell.

Many employees began seeing the power of their workplace activism in 2018 when an internal outcry led Google to abandon its work supplying the Pentagon with artificial intelligence services for conflict zones. Later in 2018, thousands of Google employees walked out to protest how the company handled sexual misconduct allegations against executives.

Google software engineer Chewy Shaw, who has been elected to the new union's executive council, said he and others decided to form the group after seeing colleagues pushed out of their roles for their activism.

"We want to have a counterforce to protect workers who are speaking up," Shaw said.

The union's first members include engineers, as well as sales associates, administrative assistants and the workers who test self-driving vehicles at Alphabet automotive division Waymo. Many work at Google's Silicon Valley headquarters, while others are at offices in Massachusetts, New York and Colorado.