Summer is coming to an end, something we've seen proof of through later sunrises. On average, we're losing two minutes and 13 seconds of sunlight a day.

It's not your imagination – the weather is changing, and the days are quickly getting shorter. In fact, Wednesday night will be the final night that the sun sets at 8 p.m. in 2022!

Summer is coming to an end, something we've seen proof of through later sunrises. On average, we're losing two minutes and 13 seconds of sunlight a day.

Starting Thursday, the sun will set at 7:58 p.m., our first pre-8 p.m. sunset since the first day of April.

FOX 5 spoke to a local psychologist who says it's time now to start preparing for these changes.

"What people do when it gets colder and darker is they start to hunker down more," says Dr. Kim Burgess. "So, you have to make active efforts to actually get out more, whether that's walking your dog…that's what we do in our family a lot of the time, and we'll go on family walks."

Dr. Burgess adds that you can avoid the negative feelings associated with the sun setting earlier by waking up earlier, so you feel like you have more time to enjoy the sun. 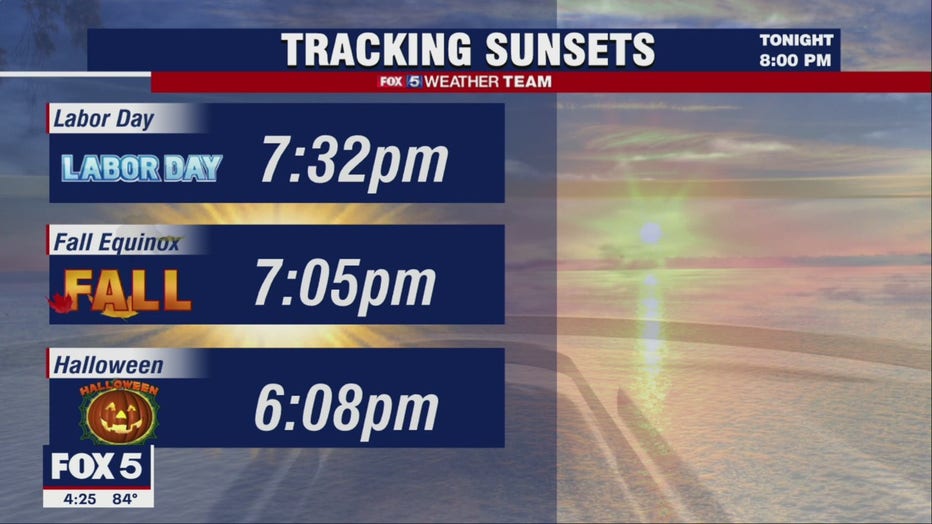 In terms of the meteorological summer, summer comes to an end on Aug. 31. By the time we head into Labor Day, the sun will be setting around 7:32 p.m. and by Halloween, that sunset will be hitting around 6:08 p.m.