Baker's office is helping to investigate the recent spa slayings that occurred in the Atlanta area.

ATLANTA - Cherokee County Sheriff’s Capt. Jay Baker recently came under criticism for saying Wednesday that the 21-year-old man accused of carrying out the recent spa slayings that occurred in the Atlanta area had a "bad day." On Thursday, he was removed from the case, according to the Cherokee County sheriff.

Earlier Thursday, before Baker's dismissal from the case, Cherokee County Sheriff Frank Reynolds had defended the spokesman's comments, saying they "were not intended to disprespect any of the victims." Reynolds also cited Baker's "personal ties to the Asian community."

In a press release, Reynolds said, "Comments made by Cherokee County Sheriff’s Office Captain Jay Baker have become the subject of much debate and anger. In as much as his words were taken or construed as insensitive or inappropriate, they were not intended to disrespect any of the victims, the gravity of this tragedy, or express empathy or sympathy for the suspect."

"I have known and served with Captain Baker for many years. His personal ties to the Asian community and his unwavering support and commitment to the citizens of Cherokee County are well known to many," Reynolds continued.

Following Baker’s comments, a Facebook page appearing to belong to him had resurfaced containing a post in which he promoted a T-shirt with racist language about China and the coronavirus last year. 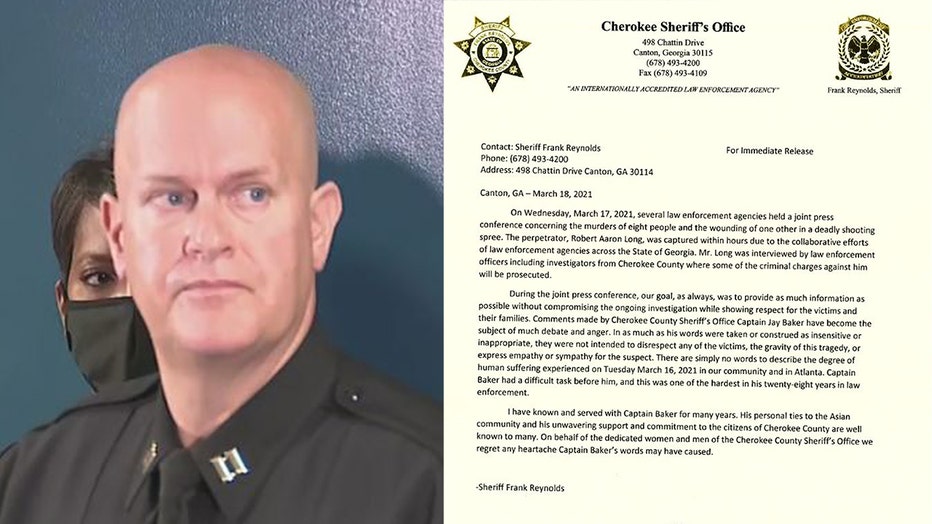 "Place your order while they last," the March 2020 Facebook post said, along with a smiley face emoji.

The Facebook account, belonging to a "Jay Baker," also featured numerous photos of Capt. Baker going back months, including one in which he was in uniform outside the sheriff's office. The account was deleted Wednesday night.

"He was pretty much fed up and kind of end of his rope and yesterday was a really bad day for him and this is what he did," Baker said during a news conference.

"To see this post is both disturbing and outrageous. It speaks to the structural racism that we’re all up against," said Vincent Pan, co-executive director of Chinese for Affirmative Action, a civil rights organization working to address anti-Asian hate crimes. "Coupled with the comments coming out of the news conference, it does not give community members confidence that our experiences and the pain and the suffering that we’re feeling are being taken seriously, at least by this particular person."

Six of the eight victims of Tuesday’s attacks were of Asian descent, including two of the four victims who were killed in Cherokee County.