A massively popular cupcake store in Northwest D.C. has been shut down, according to a notice from health officials.

WASHINGTON - Georgetown Cupcake confirmed to FOX 5 that they have now renewed their business license as of yesterday and a re-inspection of the popular store has been completed allowing the location on 3301 M Street to re-open. 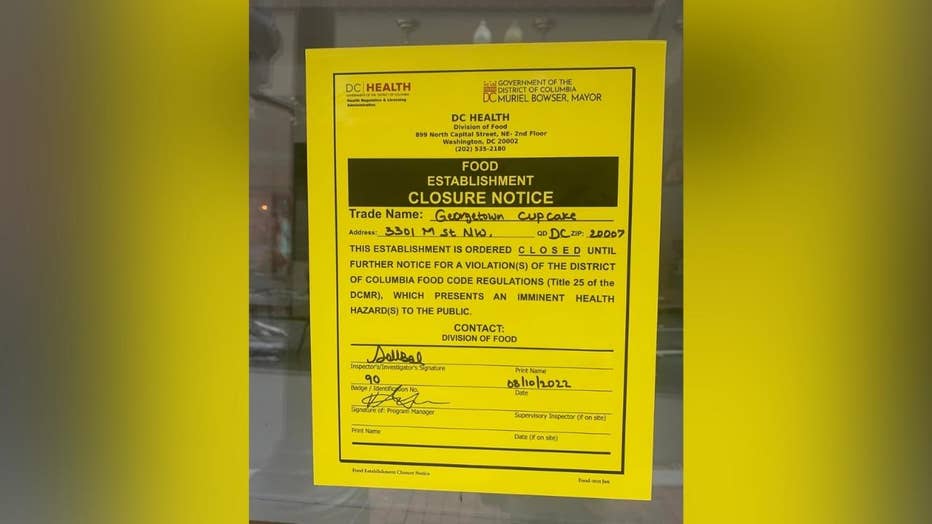 On Thursday, people seeking a sweet treat were greeted by a notice posted on its door that said the establishment was closed "for violation(s) of the District of Columbia food code regulations, which presents an imminent health hazard to the public."

Georgetown Cupcakes had released a statement at the time noting that a "business license had expired" causing the shut down and that "there were no other health code violations." However, D.C. Health told FOX 5 that the violations initially went beyond just a business license issue:

"D.C. Health performed a routine inspection of Georgetown Cupcakes on July 13,2022 noting several health and safety violations and that their business license had expired. DC Health returned on August 10, 2022 for a follow-up inspection and noted that all health and safety violations had been addressed however, they had not renewed their business license causing DC Health to close the establishment."

A report furnished to FOX 5 by DC Health further details the violations on July 13th which include issues with adequate handwashing, mold build-up, refrigeration of milk, and mice droppings.

The violations were corrected in time for the re-inspection on August 10th, however, the license expiration caused the shutdown od the cupcake shop yesterday.

Georgetown Cupcake was first opened in D.C. in 2008 by Sisters Katherine Kallinis Berman and Sophie Kallinis LaMontagne. Since then, the store's popularity has led to the sisters creating their own reality show, writing bestselling books, and expanding their cupcake stores to Bethesda, New York City, Boston, Los Angeles, and Atlanta.