How do gas prices work?

Politicians often take the heat for high gas prices, but they have little to do with what you pay at the pump.

The nationwide average price for a gallon of gasoline has hit $5 for the first time ever.

Auto club AAA said the average price on Saturday was a fraction of a penny over $5.00. Motorists in some parts of the country, especially California, are paying far above that.

The national average price has jumped 19 cents in just the past week, and it is up $1.93 from this time last year.

The high cost is taking a toll on people who need their vehicles to earn a living.

Other energy prices rising with gas | LiveNOW From FOX

As gas prices continue to rise across the nation, people in Dallas are also finding that other energy prices are rising as well.

"I'm losing money because some passengers I pick up, they don't care about that, they don't tip you," Pierre said Saturday as he pumped gas at a BP station in Brooklyn.

Katisha Thompson, who paid $79 for 13 gallons of premium at the same station, said the price is "becoming overbearing."

"It's a lot, especially when you are trying to feed a family," she said. "And it's not just gas. It's groceries, everything is going up."

Americans are still burning less gasoline than they did before the pandemic, with many people still working from home instead of commuting. But there are early signs that higher prices might be affecting drivers' habits, too.

The amount of fuel consumed last week was down 3% from the previous week and 6% from this time last year, according to preliminary figures from the Oil Price Information Service.

There are several reasons for the surge in gasoline prices. 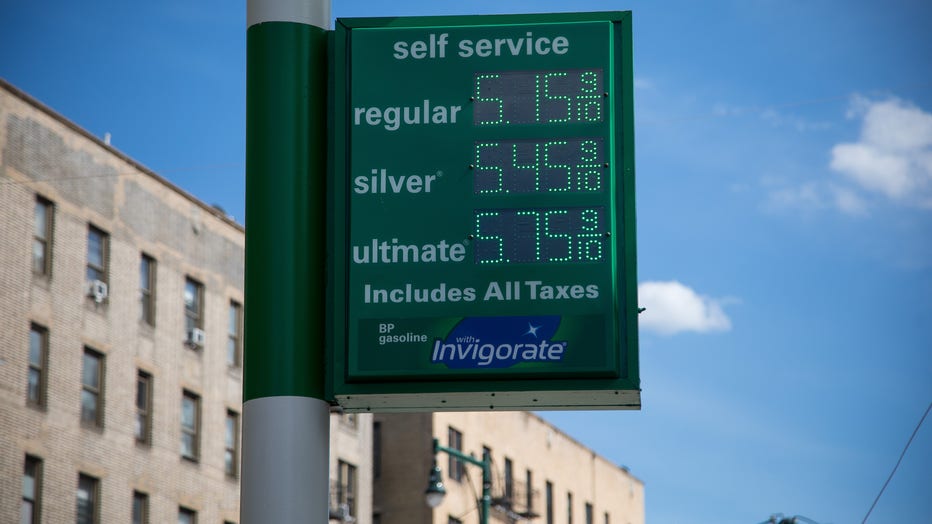 Gas prices are displayed at a gas station in the Brooklyn borough of New York, the United States, on June 10, 2022. (Photo by Michael Nagle/Xinhua via Getty Images)

Americans typically drive more starting around Memorial Day, so demand is up. Global oil prices are rising, compounded by sanctions against Russia, a leading oil producer, because of its war against Ukraine. And there are limits on refining capacity in the United States because some refineries shut down during the pandemic.

Add it all up, and the cost of filling up is draining money from Americans who are facing the highest rate of inflation in 40 years.

California has the highest average price, at $6.43, according to AAA. The lowest average is Mississippi, at $4.52.

While this is the first time breaking the $5 barrier, it's still not a record when inflation is taken into account. Gas peaked at $4.11 a gallon in July 2008, which would be equal to about $5.40 a gallon today.