Police crackdown on speeding in Gaithersburg

FOX 5 is getting an exclusive inside look at the Gaithersburg Police Department who is cracking down on speeders tonight in one community.

GAITHERSBURG, Md. (FOX 5 DC) - On Friday night, Gaithersburg City Police officers said they stopped a DUI driver among various pedestrians and drivers as part of a Downtown Crown Pedestrian Safety Education Detail. The detail has been held at various places throughout Gaithersburg City, but GPD tells FOX 5 this is the first they’ve held this detail at the Downtown Crown, following FOX 5 reporting on traffic safety concerns raised by residents within the newer urban community.

“The stop sign’s back there!” FOX 5 heard an officer say to a driver he stopped.

Gaithersburg City Police Sgt. Scott Scarff, who led the Friday night detail, described a number of issues leading to traffic incidents at the Downtown Crown. One of those issues, he says, are drivers trying to find the closest street parking instead of using nearby parking garages. The detail began at 5 p.m. and lasted until 7 p.m. in an attempt to reach the those out for the “dinner rush.”

During this time, officers were seen stopping vehicles that rolled through stop signs. Those officers issued warnings that described the violations they may have just committed and the prices for them, should they get ticketed. Police also spoke with pedestrians and offered safety tips for crossing the roadway. 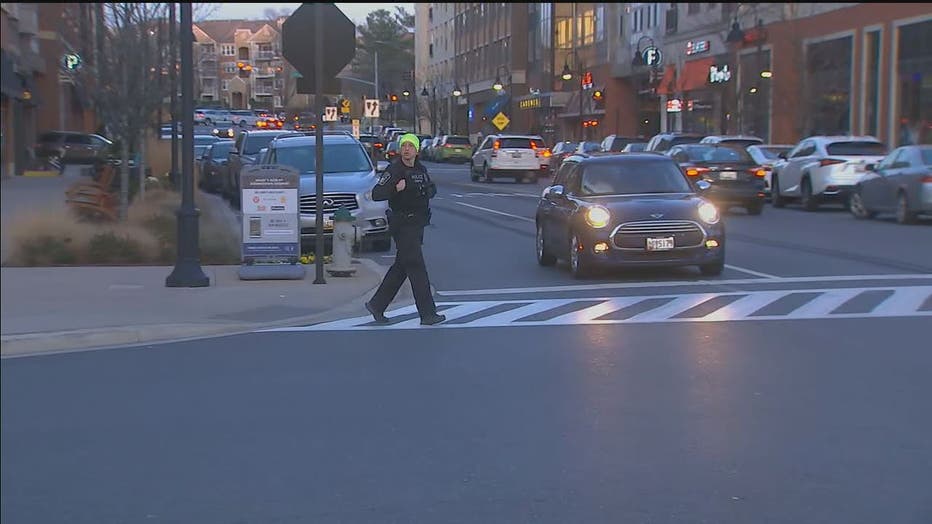 A couple of weeks ago, FOX 5 pressed Montgomery County and Gaithersburg City leaders for answers after viewers reached out to the station about traffic safety concerns at the Downtown Crown. Those residents told FOX 5, they had been told local police did not have authority to patrol the Crown’s private streets -- even though the community is open to the public. These concerns were heightened in September after an elderly woman, who was struck by the Downtown Crown’s L.A. Fitness, died from her injuries. Several neighbors, who claimed they had raised concerns then, told FOX 5 the problems only persisted.

One concerned resident, Todd Moniot, showed FOX 5 surveillance video of a woman getting struck by a car just a few weeks ago in an area that should have had a cross walk painted. Since then, certain steps have been taken. A crosswalk was painted in the area where the woman was struck by a car.

The Gaithersburg City Attorney also cited an opinion, giving Gaithersburg City Police permission to patrol the Crown if they need to.
What message do they hope to get across?
“I think the message we really want to get out there is we can do all kinds of things. We can put out our best effort. But the bottom line is it depends on motorists and pedestrians. They have to really commit to saying, ‘Look. I’m going to be patient, I’m going to be curious. And even though I may have the right of way, my first responsibility is to watch out for others so we’ll all be safe,” said Sgt. Scarff.

A Spokesperson for GPD, Ofc. Dan Lane, told FOX 5 one of the tips they tell pedestrians is to make sure to look a driver in the eyes before entering into a crosswalk, to make sure the driver sees you.

In an update to previous reporting, Sgt. Scarff told FOX 5 that despite residents’ frustrations, it is not illegal to make a U-turn in the Downtown Crown area – so long as it’s done safely. This means yielding to pedestrians and on-coming traffic.