Full interview: Dog the Bounty Hunter on where he thinks Brian Laundrie is

The reality TV star real-life bounty hunter, whose real name is Duane Chapman, lost his own daughter when she was the same age as Gabby Petito.

The reality TV star and legendary bounty hunter, whose real name is Duane Chapman, is a father of 13 and lost a daughter around the same age as Gabby Petito in a car accident in 2006. He was already in Florida on a honeymoon with his wife Francie Chapman, he said, when people began reaching out to him to look into Laundrie’s disappearance.

"I know what the victims feel like," he said.

Petito’s parents and stepparents spent Saturday preparing for a planned funeral for their daughter Sunday, a week after her remains were discovered at a campsite she shared with Laundrie in late August. 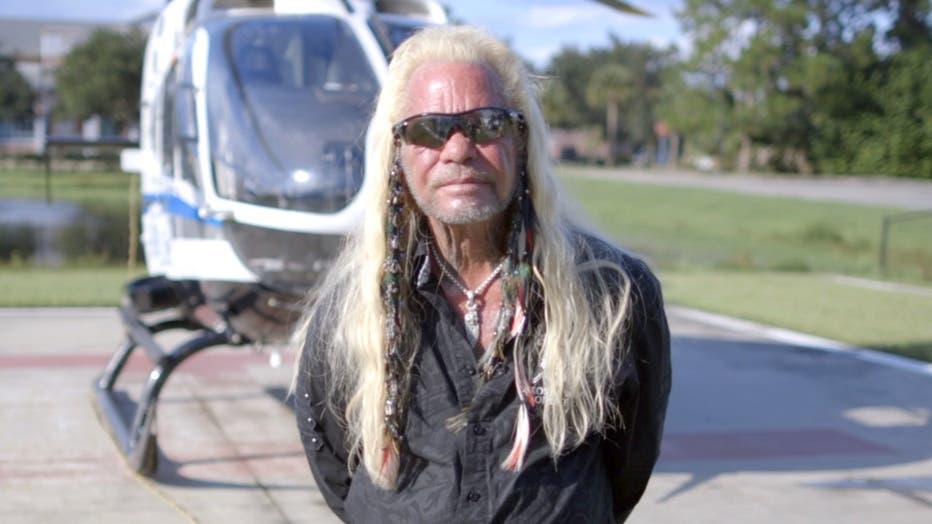 Dog the Bounty Hunter is in North Port, Florida, to assist the search for Brian Laundrie. (Matt Leach/Fox News)

Laundrie’s parents reported him missing on Friday, Sept. 17 – telling police they hadn’t seen him since three days prior.

"And the dad can still reach out to me, through social media. Let’s get the kid captured alive. Alive."

On Sept. 19, an FBI-led search mission discovered the remains of his fiancé, Petito, at the Spread Creek dispersed camping area north of Jackson Hole, Wyoming.

Laundrie had been named a person of interest in her disappearance and is the subject of a federal indictment for alleged debit card fraud – prompting a warrant that Chapman carried with him Saturday.

GABBY PETITO CASE: WHERE COULD BRIAN LAUNDRIE BE 10 DAYS AFTER SLIPPING AWAY?

The Laundrie family did not answer the door for Duane 'Dog' Chapman, who chatted with neighbors before leaving. Video via FOX News Digital.

With a search underway at a swampy reserve near Laundrie’s home, many outside experts say they don’t believe he could be surviving there.

Surviving in the swamp would be difficult enough, Chapman said, and thermal vision devices used by law enforcement make eluding capture even harder.

Chapman, who has his own anonymous tip line (833-TELL-DOG), said he’s getting calls every two or three minutes. His wife, Francie Chapman, stood a few feet away fielding a steady stream of calls.

GABBY PETITO HOMICIDE: UTAH POLICE MAY NOT HAVE HAD ALL INFORMATION RESPONDING TO MOAB INCIDENT, EXPERTS SAY

Much of the information he’s received points toward the Appalachian Trail – where Laundrie camped out before. So if he’s not in the Carlton Reserve as many suspect, he may be up there.

"If there’s anywhere out there that looks the hottest, that could be the area," he said.

Dog the Bounty Hunter arrives at the home Brian Laundrie shares with his parents. The reality TV star knocks on the screen door, but no one answers. He then leaves.

If Laundrie skipped town – possibly with a head start that may or may not have been aided by his parents – then investigators need to figure out where he went into the mountains and begin their search there with dogs, infrared and other technology, he said.

"I think he’s young enough, not an experienced criminal, but what is his greatest experience? Outdoorsman -- that’s what he does the best," Chapman said. "I don’t think he can shoplift, live on the run, live in cheap hotels. On a one to 10 he’s probably a six, compared to the outdoorsmen and some of the guys I’ve captured."

So, Chapman said, he’s probably on the trail.

"What’s in his blood is in them hills."

And Chapman is no stranger to the Appalachian Trail himself, he said. He took part in a massive manhunt in upstate New York in 2015 for two escaped murderers.

Six days into the search for Brian Laundrie, police in North Port insist the grueling, exhausting search at Carlton Reserve in Sarasota County is worthwhile as they try to solve Gabby Petito's disappearance. Some video provided by NPPD.

And if Laundrie does turn out to be in the swamp, he would have to be moving by night, when authorities suspend their search, and trying to hide in the day.

And, as other experts have suggested, Chapman said Laundrie’s probably not in Mexico.

"A White boy, that doesn’t know Spanish, the cartel’s gonna grab him for the reward," he said. "So he’s not down there."

So he’s in the states – and probably somewhere along the East Coast, according to Chapman.

"Somebody else knows where he’s at, where they dropped him off at, or did they drop him off," he said. "That person is gonna tell us, because again, we're not the police. This is anonymous."