A junior varsity football player at Governor Thomas Johnson High School in Frederick was heard in more than one video using the N-word, and now a parent in the county is pulling her son out of the school. FOX 5's Stephanie Ramirez has the story.

FREDERICK, Md. - A Frederick County mother tells FOX 5 she is pulling her son out of his high school and is upset with how the school responded to a student football player’s alleged repeated use of a racial slur.

The issue involves a junior varsity football player at Governor Thomas Johnson High School, who can be heard in more than one video using the N-word.

Melanie Travis, the mother of a bi-racial football player who is also on the JV team said, that the school "completely washed their hands clean of" the situation. Travis said she was told that since it happened on a chat platform outside the school system, Thomas Johnson intended on leaving it up to the parents to discuss with their kids.

"The fact that the principal never reached out to the school board bothers me," Travis said.

The concerned mom told FOX 5 that she feels her complaints went unanswered.

On Wednesday night, Travis' daughter posted two videos to social media showing the incident. Since then, the post has circulated online throughout the community.

In another video you hear the student say, "I’m smoking that n***** pack."

The videos were posted with the message: "For a few weeks a kid on my brother's football team at GTJHS has been using the N word. My mom complained and nothing was done…"

Travis’ daughter also directed attention to the player’s mother, who FOX 5 is told is very involved with the team as a "football mom." 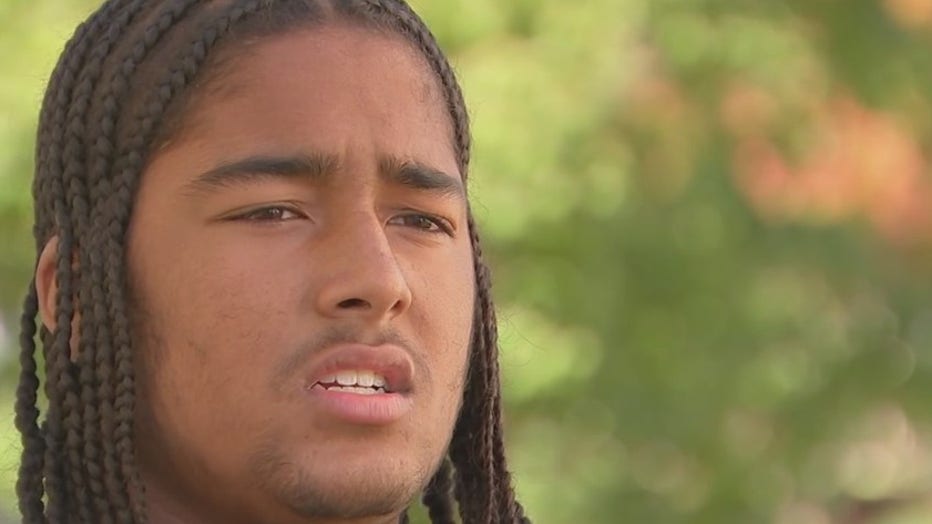 Joseph Travis – the 10th-grader who has allegedly been ridiculed – told FOX 5, "I’m a little bit frustrated with the team because last night was the first time that besides me, another kid really stood up to him about it."

"Some kids on the team just let him use it freely, and it’s not okay. Last night, really helped get it out there more," he said.

Joseph claims there was almost a fight over the player’s use of the N-word the day before.

On Thursday morning, the Frederick County Public Schools Spokesperson told FOX 5 that as soon as they learned of the videos, an investigation began.

The student athlete was then removed from campus.

should be applied here.

"We know how hurtful this is to so many in our community, and it’s just not acceptable," FCPS Spokesperson Brandon Oland told FOX 5.

Travis said she appreciates how the school board is working with the family now. However, she also said, "The word that he used on Sept. 14th that was brought to my attention, to me, was enough that he should’ve been kicked off the team. And he never … That didn’t happen. So, I think they also need to do something with the staff who swept this under the rug."

Oland provided FOX 5 with the statement sent by Thomas Johnson’s principal on Thursday:

After a collaborative investigation by the Frederick County Public Schools and the Frederick City Police Department, officials were able to identify the student who made the posts.

We recognize the harm done by the hateful speech directed toward Black students. This type of speech is unacceptable and the student will be subject to appropriate school discipline as well as any related criminal charges for using hate speech. GTJHS administration is actively working through the discipline process to ensure that this situation is addressed and all students are aware of the seriousness of hate speech.

FCPS has no tolerance for discriminatory language and hate speech towards a group or person on the basis of identity. The physical, social and emotional safety of all members of the FCPS community is our most important responsibility.

In the immediacy we will be meeting with students directly impacted.  Every child at GTJHS is a valued member of our school.  Their voices, feelings and perspective are priority and will continue to be as we navigate through this incident. We are a collective student body that includes cultures and ethnicities from 62 nations around the globe. Our diversity is the fabric of our strength. Through this incident we will unify and show support for our students.

We encourage any student who wants to discuss the posts to reach out to a trusted adult. Our school counselors are available to support any students with concerns.

Please use this opportunity to remind your child that we take all hate speech extremely seriously. Let them know it is okay to: Report It. Don't Repost It. Everyone is encouraged if they See Something, Say Something. The safety of our school is our most important responsibility.

Last year, we shared this video message with the community about social media threats and how they are handled. It is to all of our benefit to view this message and be reminded of our role in promoting an inclusive culture for not just our students but every member of our Patriot Community.

Oland also provided this joint statement from the FCPS school board president and superintendent:

Frederick County Public Schools (FCPS) is committed to cultivating a culture that is welcoming and inclusive for all.  Today, we learned of an extremely disturbing social media post involving a student who attends a high school in our district.  The social media post contained hate speech and racial slurs.

The student responsible for producing the post has been identified. FCPS will respond to hate speech, threats of violence, and discrimination with severe disciplinary consequences.

Racism and hate have no place in our community, nor in our schools. FCPS maintains an unwavering commitment to ensuring every member of our community knows they are valued, accepted, and welcomed. This incident demonstrates our need to continue our unrelenting efforts to foster an inclusive and safe environment. We recognize work remains in this area and pledge to dedicate resources, staff, and training to foster an environment that promotes the safety and welfare of our entire school community. We have initiated actions to support students and the school impacted by the student's behavior and post.

We ask for your support in our effort to build a community that embraces everyone.  We implore any community member who observes and/or experience any form of discrimination, harassment, and/or intimidation to alert school administration and/or contact central office staff by completing the Bullying, Harassment, or Intimidation Reporting Form (linked here or accessible through the QR code below).

Together, we can promote a culture that is inclusive and accepting for all.