LA PLATA, Md. (FOX 5 DC) - Only on FOX 5 Monday, Maryland Deputy Health Secretary Fran Phillips was asked about Charles County’s nursing facilities hiding behind ‘patient privacy’ as the reason for not publically reporting COVID-19 outbreaks. This is been an issue across the region—and in Charles County, MD, where one senior living facility refuses to report their potential outbreak publically even though other counties, including Montgomery and Carroll, have done so following the same patient privacy guidelines.

The question comes after various people and employees connected the Sagepoint Senior Living Services nursing facility in La Plata, MD raised serious concerns about how the facility handled their COVID-19 response. Accusations of management “covering-up” an outbreak were made by both the relatives or residents and employees with inside knowledge.

On Monday, a “Mrs. K” who said the nursing staff treated her mother like family, told FOX 5 over the phone, she learned of her mother’s COVID-19 passing at around 3 a.m. Monday morning. “Mrs. K” thanked staff for their care, but accused management of being less forthcoming.

When asked if she was ever told of how many COVID-19 patients surrounded her mother, “Mrs. K” answered: “No, and I did ask and was concerned, ‘Was it that person in a wing , prior to a different wing than my mother?’ And that always worried me.”

She thanked the nurses for helping them FaceTime with her mother a few days before the 92-year-old passed. However, “Mrs. Kay” said she didn’t learn of the severity at the Charles County site, until she watched a FOX 5 DC news report over the weekend.

The Charles County Health Department reported on Saturday 101 confirmed COVID-19 cases were counted at nursing homes and assisted living facilities across the county, including Sagepoint.

A government source told FOX 5 96 of those 101 cases are connected to Sagepoint, which has two facilities in Charles County.

FOX 5 spoke with the state’s deputy health security about this on Monday as she was on her way to a meeting.

“How do you respond to these places continuing to site patient privacy? They won’t even give the numbers or deaths when other counties are doing so,” said FOX 5 reporter Stephanie Ramirez.

Phillips responded: “Think about a nursing home -- in public health we, when we have outbreaks from time-to-time, and fortunately it’s not that often, if there’s outbreaks in restaurants or in retail facilities, sometimes even in schools or businesses, workplace, where we feel there are members of the public, general public who may be at risk, it may be an important message for the public about an outbreak. Right now at nursing homes, there are no visitors." 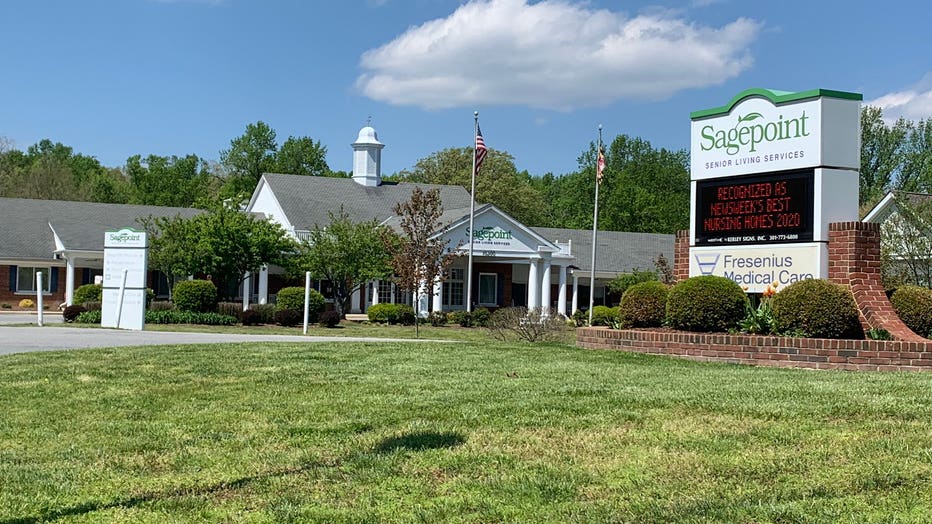 When it was repeated that even EMT’s are telling FOX 5 they’re been kept in the dark, Phillips continued:

"The residents and the staff are the people who need to be protected --  need to understand what’s going on in that nursing home. And in fact, that was a ruling from the Federal Government over the weekend: to make sure that nursing homes fully advise their staff and residents of any COVID-related developments,” Phillips went on to say.

Asked once more about the concern over Sagepoint from Charles County’s first responders, Phillips replied, “EMTs are terrific first responders. They go into situations every day, they don’t know what they’ll encounter. And so that’s why it’s so important for EMTs to be trained and have equipment that they need, the personal protective equipment, to be able to protect themselves so they can continue to [be on the job].”

FOX 5 also asked the Maryland Health Department last week to provide more details on the state “Strike Team’s” response to Sagepoint and an accusation raised that a volunteer Task Force member had been turned away.

A Maryland Department of Health Spokesperson sent this email to FOX 5 on Monday in response to our questions:

“The Maryland Department of Health (MDH) can speak generally about the strike teams and how they’re formed, but information about a specific visit is protected under the Medical Review Committee. The teams are composed of members of the Maryland National Guard, HHS teams, and teams formed by hospital systems. While many facilities need volunteers to assist them, the volunteers are not part of the strike teams. Currently, the strike teams have had 35 deployments throughout the state. Requests are always initiated to the Statewide Emergency Operations Center by the local health officer and local emergency manager, at the initial request of the facility. These three entities need to be in agreement about the need for a strike team deployment.”