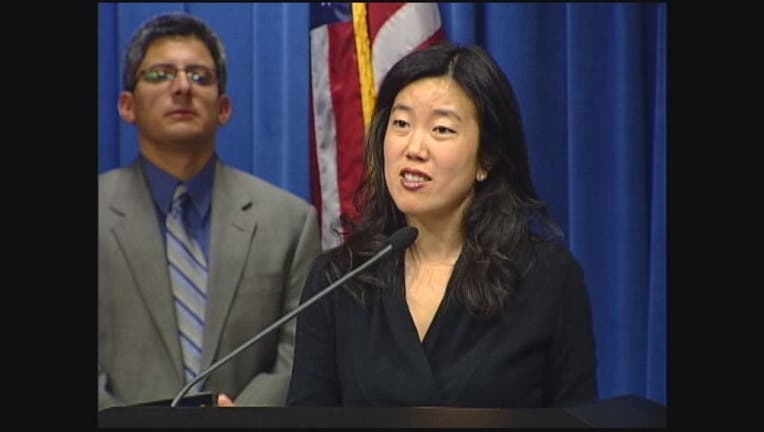 NEW YORK (AP) -- The Latest on Donald Trump's transition to the presidency (all times local):

Rhee met with Trump on Saturday amid speculation that she was being considered for education secretary.

Rhee tweeted a statement Tuesday saying she's "not pursuing a position with the administration." She says she appreciated the chance to discuss education with Trump. She says those who urged her not to meet with him were "wrong" and that it's important to find common ground on education policy.

Rhee is a Democrat who served as District of Columbia schools chancellor from 2007 to 2010, where she was viewed as a national leader in urban education reform. She later founded a nonprofit called StudentsFirst.

He tells The New York Times on Tuesday that "clean air is vitally important" and he's keeping an open mind about whether to pull the United States out of a multinational agreement on climate change.

He appeared to break dramatically with his own previous remarks that climate change was a hoax.

The Times reported that he said Tuesday, "I think there is some connectivity. Some, something. It depends on how much."

President-elect Donald Trump is disavowing white nationalist sympathizers who celebrated his election during a conference in Washington over the weekend.

He tells The New York Times that "I disavow and condemn them."

He was responding to a question during Tuesday's interview about a weekend event during which attendees cheered Trump's election and gave Nazi salutes.

The Times is publishing excerpts via Twitter of its interview Tuesday with Trump. The newspaper didn't immediately release a transcript.

President-elect Donald Trump says that in theory he could run his business and the country with no conflict of interest.

He tells The New York Times on Tuesday that "the president can't have a conflict of interest," but he's in the process of handing over his business to his children, anyway.

Trump is facing questions about whether he and his children face a conflict of interest by having roles in the presidential transition and the Trump Organization.

He said of his critics, "If it were up to some people, I would never, ever see my daughter Ivanka again" to avoid any business-presidential conflict.

President-elect Donald Trump says he wants to move on from years of investigations of Bill and Hillary Clinton.

He tells The New York Times that prosecuting the Clintons "would be very, very divisive for the country." He says he doesn't want "to hurt the Clintons," adding that he doesn't think his supporters will be disappointed once he explains that "we, in many ways, will save our country."

The Times is publishing excerpts via Twitter of its interview Tuesday with Trump. The newspaper didn't immediately release a transcript.

Trump adviser Kellyanne Conway earlier in the day told MSNBC that Trump was sending a signal to congressional Republicans to abandon years of investigations into Hillary Clinton's private email server and the deadly raid on the U.S. compound in Benghazi, Libya.

Trump's announcement on Twitter comes a week after Carson let it be known that he is not interested in being considered for any position in the Trump administration.

In Tuesday's tweet, Trump says: "I am seriously considering Dr. Ben Carson as the head of HUD. I've gotten to know him well -- he's a greatly talented person who loves people!"

Last week, Carson business manager Armstrong Williams said Carson had opted out of being considered for any position, including as head of the Department of Health and Human Services or the Education Department.

Williams also said Trump had made clear he wanted his rival-turned-adviser in some role.

White House spokesman Josh Earnest is confirming that President Barack Obama has spoken with his successor on at least one occasion since their Oval Office meeting.

However, Earnest says he wouldn't discuss any details of their talks. He says the White House has traditionally not unveiled details of calls that Obama has had when consulting former presidents, and that's a precedent it wants to protect with President-elect Donald Trump.

Earnest says Trump indicated during their Oval Office meeting that he wanted the opportunity to consult with Obama during the course of the transition. Meanwhile, Obama has committed to a smooth transition, and as a result, they have "spoken at least once" since that meeting.

Earnest says Trump is free to discuss whatever he chooses about his consultations with the president.

President-elect Donald Trump's visit to The New York Times is to consist of a private meeting with the publisher followed by an on-the-record session with Times journalists.

Trump at first abruptly canceled the meeting, accusing the organization of changing the ground rules. The Times said Trump's team actually tried to change the conditions by asking that the entire session be off the record.

But before long, both sides said the meeting was back on Tuesday.

President-elect Donald Trump may be visiting with The New York Times after all.

Spokesman Hope Hicks told reporters gathered in Trump Tower on Tuesday morning that Trump was "going to The New York Times" later in the day.

The statement comes only hours after Trump tweeted that he would not be meeting with the newspaper.

He wrote on Twitter that he canceled the meeting "with the failing @nytimes when the terms and conditions of the meeting were changed at the last moment. Not Nice."

A top adviser to Donald Trump is suggesting that the president-elect is going to help Hillary Clinton "heal" and not pursue a probe of her private email server.

Kellyanne Conway said on MSNBC on Tuesday that Trump is setting a tone for congressional Republicans by refraining from calling for more investigations. She says that "he doesn't wish to pursue these charges."

Days earlier, Trump told CBS's "60 Minutes" that he wants to think about whether to look more into Clinton's homebrew email server and the Justice Department's decision to not recommend charges against her.

Now Conway says that, "if Donald Trump can help her heal, then perhaps that's a good thing."

Trump during the campaign vowed to put his Democratic presidential rival "in jail" over the matter.

President-elect Donald Trump has abruptly canceled a meeting with The New York Times. He accused the organization of changing the conditions for the session "at the last moment." The newspaper denied the charge and said Trump's aides tried to change the rules.

He'd been scheduled to meet Times reporters, editors and columnists and did not give details of his complaint, saying in a morning tweet only that "the terms and conditions of the meeting were changed at the last moment. Not nice."

Eileen M. Murphy, the newspaper's senior vice president for communications, said the paper "did not change the ground rules at all."

She said Trump's aides asked for a private meeting only, with nothing on the record, after having agreed to a meeting that would consist of a small off-the-record session and a larger on-the-record one with reporters and columnists.