Nearly 80 people were injured and 17 firefighters were missing after four explosions.

HAVANA (AP) - Flames engulfed a fourth tank at an oil storage facility in western Cuba on Tuesday as the raging fire consumes critical fuel supplies on an island grappling with a growing energy crisis.

Firefighters and specialists from Mexico and Venezuela helped fight the blaze in the province of Matanzas with boats, planes and helicopters as they sprayed foam on the containers, a first for crews since broiling temperatures had prevented them from doing so earlier.

Cuban President Miguel Díaz-Canel said crews have taken control of the area where the fire is burning and are taking further steps to quell it.

"They are not easy tasks," he said. "It is an intense and complex incident."

The fire at the Matanzas Supertanker Base has killed at least one person and injured 125 others, with another 14 firefighters still missing. It also forced officials to evacuate more than 4,900 people and shut down a key thermoelectric plant on Monday after it ran out of water, sparking concerns about additional blackouts.

Those injured were treated mostly for burns and smoke inhalation. More than 20 remain hospitalized, with five of them in critical condition.

"This situation has us very worried at the moment because there are problems with electricity, with the environment, with the people who are still living here," said Adneris Díaz a 22-year-old cafe owner. 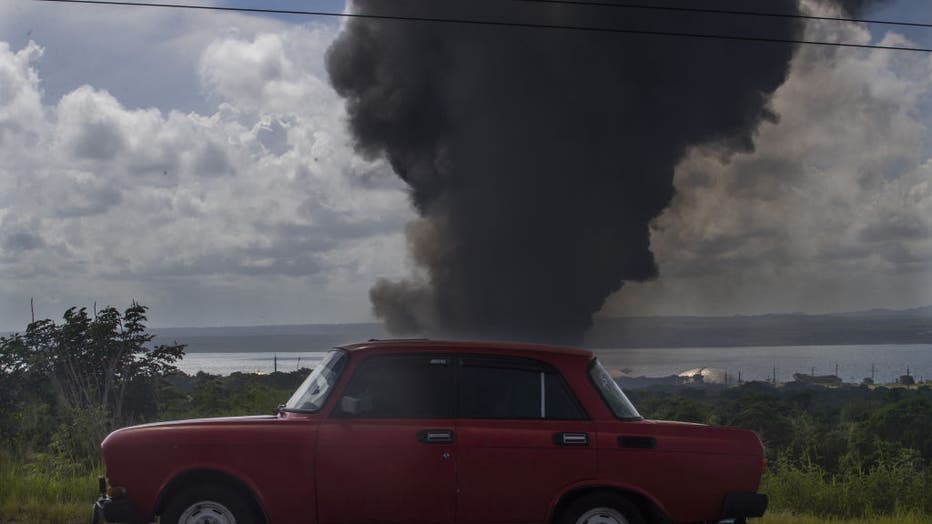 A car passes through one of the streets of Matanzas as smoke rises on the second day of the fuel depot fire in the industrial zone of Matanzas, Cuba on August 07, 2022.

The eight-tank facility plays a crucial role in Cuba’s electric system: it operates an extensive oil pipeline that receives Cuban crude oil that is then ferried to thermoelectric plants that produce electricity. It also serves as the unloading and transshipment center for imported crude oil, fuel oil and diesel.

The facility caught on fire late Friday after lightning struck one of its tanks, sparking several explosions as it spread over the weekend. The first tank was at 50% capacity and contained nearly 883,000 cubic feet (25,000 cubic meters) of fuel. The second tank was full.

Officials have yet to provide an estimate of damages.

The blaze comes just days after the government announced scheduled blackouts for the capital of Havana amid a sweltering summer.

"The economic effects are clear," said Tahimi Sánchez, a 48-year-old cafe owner. "They are there, we will notice them and we will see them, but we are confident, and we are going to come out of all this well."