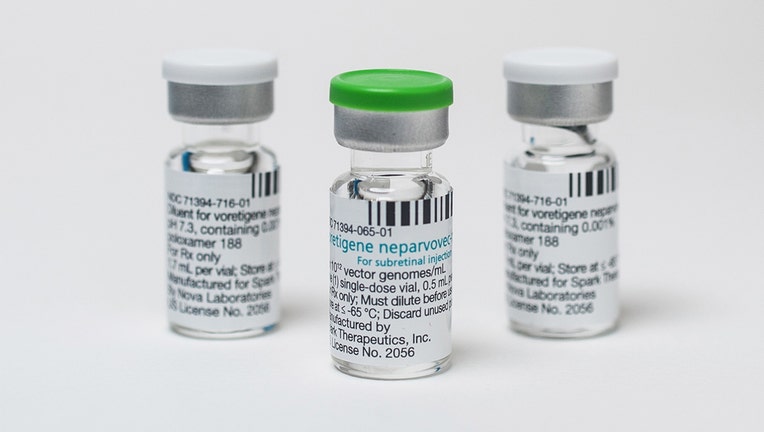 WASHINGTON (AP) -- U.S. health officials on Tuesday approved the nation's first gene therapy for an inherited disease, a treatment that improves the sight of patients with a rare form of blindness. It marks another major advance for the emerging field of genetic medicine.

The approval for Spark Therapeutics offers a life-changing intervention for a small group of patients with a vision-destroying genetic mutation and hope for many more people with other inherited diseases. The drugmaker said it will not disclose the price until next month, delaying debate about the affordability of a treatment that analysts predict will be priced around $1 million.

The injection, called Luxturna, is the first gene therapy approved by the Food and Drug Administration in which a corrective gene is given directly to patients. The gene mutation interferes with the production of an enzyme needed for normal vision.

Patients who got the treatment have described seeing snow, stars or the moon for the first time.

"One of the best things I've ever seen since surgery are the stars. I never knew that they were little dots that twinkled," said Mistie Lovelace of Kentucky, one of several patients who urged the FDA to approve the therapy at a public hearing in October.

Patients with the condition generally start losing their sight before 18, almost always progressing to total blindness. The defective gene that causes the disease can be passed down for generations undetected before suddenly appearing when a child inherits a copy from both parents. Only a few thousand people in the U.S. are thought to have the condition.

Luxturna is delivered via two injections -- one for each eye -- that replace the defective gene that prevents the retina, tissue at the back of the eye, from converting light into electronic signals sent to the brain.

The FDA has approved three gene therapies since August, as decades of research into the genetic building blocks of life begin translating into marketable treatments. The previous two are custom-made treatments for forms of blood cancer. Novartis' Kymriah is priced at $475,000 for a one-time infusion of genetically enhanced cells. Gilead Sciences' similar treatment, Yescarta, costs $373,000 per treatment.

The Philadelphia-based Spark Therapeutics said it will announce its price in early January, but suggested its own analysis put the value of the therapy in the $1-million-dollar range. Key to the company's reasoning is the assumption that Luxturna will be given once, with lasting benefits. To date, the company has tracked patients enrolled in a key study for as long as four years and hasn't seen their vision deteriorate.

"All the data we have today suggests it's long-lasting, if not lifelong," said Spark CEO Jeffrey Marrazzo.

Given Luxturna's FDA approval and strong study results, many experts expect U.S. insurers, including both the federal government and private plans, to cover the treatment.

The spate of new genetic therapies marks a boom for a field once plagued by safety concerns. Gene therapy research suffered a setback in 1999 with the death of a patient treated for a rare metabolic disorder at the University of Pennsylvania. In another case, patients treated for an immune disorder later developed leukemia.

Dr. David Valle said initial excitement about the wide-ranging possibilities for genetic medicine has given way to a more deliberative approach focused on individual diseases. He applauded researchers at the University of Pennsylvania for decades of work that led to the treatment.

"The hype for gene therapy has been without many successes and actually a few failures, so chalk this one up in the win column," said Valle, a geneticist and pediatrician at Johns Hopkins University, who was not involved in Luxturna's development.

University of Pennsylvania researcher Dr. Jean Bennett said she and her husband, Dr. Albert Maguire, first imagined using genetic medicine to treat retinal blindness in the mid-1980s. But it took decades to develop the science and technology, with the first animal tests in 2000 and the first human trials in 2007.

"We didn't know what genes caused the disease, we didn't have animal models with those genes, we didn't have the ability to clone genes and deliver them to the retina -- so it took time to develop all that," said Bennett, an eye specialist.

Bennett and Maguire tested the treatment by recording patients' ability to complete an obstacle course at varying levels of light, simulating real-world conditions. A hallmark of the disorder is difficulty seeing at night.

One year after treatment, patients who received the injection showed significant improvements in navigating the obstacle course at low light levels compared to those who did not receive the therapy.

Goldman Sachs analyst Salveen Richter predicts Luxturna will cost $500,000 per injection, or $1 million for both eyes. She points out that many current drugs for ultra-rare diseases are priced at $250,000 per year or more, putting their long-term cost over $1 million after several years.

But David Mitchell, a cancer patient and advocate for lower drug prices, worries that the cost of genetic therapies won't be sustainable.

"We don't have unlimited dollars in this country," said Mitchell, founder of Patients for Affordable Drugs. "You get 50 of these drugs in the system and I don't know how we will handle it as a country."

This Associated Press series was produced in partnership with the Howard Hughes Medical Institute's Department of Science Education. The AP is solely responsible for all content.