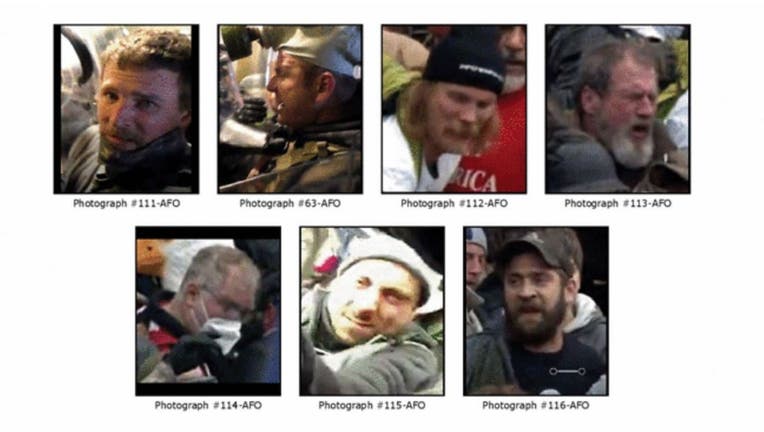 WASHINGTON - The FBI on Sunday released photos of seven men it says attacked a D.C. police officer during a riot on Capitol Hill Jan. 6.

D.C. police officer Mike Fanone was seen in a now-viral video being dragged and beaten down a set of stairs at the Capitol building.

Pro-Trump protesters were caught on camera dragging a DC police officer out of the Capitol building during a riot that erupted last week.

The incident was caught on camera by Jarrett Robinson.

It's one of an array of videos and images that emerged showing some police posing with protesters, but many more officers being brutalized or humiliated by pro-Trump activists.

In the video, Fanone can be seen as he's dragged and carried down the steps.

Finally, he's lifted up off the ground, only to have one protester pop out of the crowd to strike him on the head.

Fanone talked to FOX 5 on Friday, saying he "wasn’t terrified," but he was "horrified."

The incident led to five deaths – including that of a Capitol police officer.

The protesters had left a rally featuring President Donald Trump, who reiterated his claim that the 2020 election had been "stolen."

The protesters then marched on the Capitol as Congress convened to certify the Electoral College vote, which would cement President-Elect Joe Biden’s victory.

Since then, the FBI says it has made more than 100 arrests in connection with the assault on Capitol Hill – and that it expect that number to increase exponentially.

You can also submit photos, videos, or additional information at fbi.gov/USCapitol.