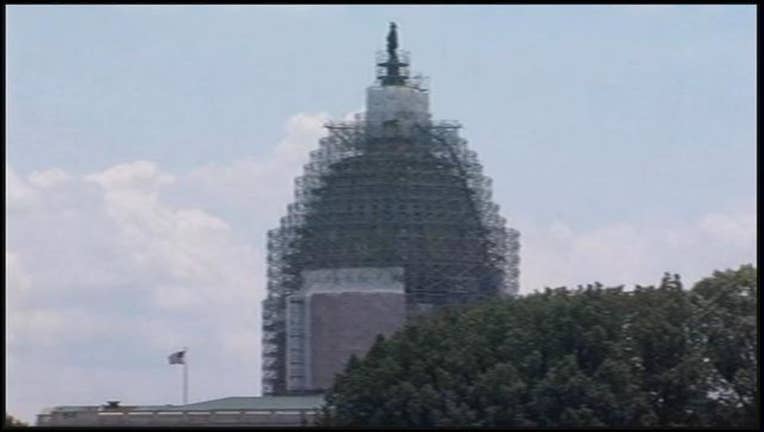 Within an hour after alarms sounded, employees returned to the building. Tourists were readmitted shortly after that.

Lawmakers are in recess this week for the weeklong Memorial Day break.

The U.S. Capitol Police told congressional workers in an email that two alarms were triggered in the visitors' center, which they said was apparently caused by "a known problem with environmental controls with the kitchen exhaust fan." It provided no additional detail.

Kimberly Schneider, a Capitol Police spokeswoman, said there were no signs of smoke or fire. An email sent later to House staff by the chamber's sergeant at arms office said the triggering of alarms "was most likely caused by smoke in the kitchen; there was no fire."

The evacuation occurred two days after a bomb squad destroyed a pressure cooker found in an unattended, "suspicious" vehicle on the National Mall near the Capitol and the vehicle's Virginia owner was arrested. Almost six weeks earlier, a Florida man was arrested after he flew his gyrocopter through restricted air space and onto the Capitol grounds.

In Tuesday's incident, police cleared the East Lawn and closed First Street between the Capitol and the Library of Congress until the buildings were reopened.

Denise Grandits of Buffalo, New York, said she and 70 eighth-graders were touring the Capitol and heard the alarms. She said the guide escorted them out of the building.

"We just walked. It was pretty calm," she said.

According to the police email, officials initially thought one of the two triggered alarms was in the Capitol and they began evacuating that building.

In a moment of confusion, police soon advised people in the Capitol that they could remain inside because the alarms were not coming from that building. They reversed themselves again minutes later and resumed evacuating the Capitol.

The police email said once officials determined both alarms were in the visitor center, they decided to continue emptying the Capitol "to ensure staff and members did not receive conflicting information."