Health experts fear that silent carriers of the virus could unwittingly infect others at protests where people are packed cheek to jowl.

Dr. Anthony Fauci said in an interview with Stat, a health and science-related news website, that the task force used to meet every single day — including on the weekends. About 75% of the time, it would meet with the president afterward.

“So I was meeting with him four times a week back, a month or so ago,” Fauci said in the interview published Monday.

“But as you probably noticed, the task force meetings have not occurred as often lately. And certainly my meetings with the president have been dramatically decreased,” he said. 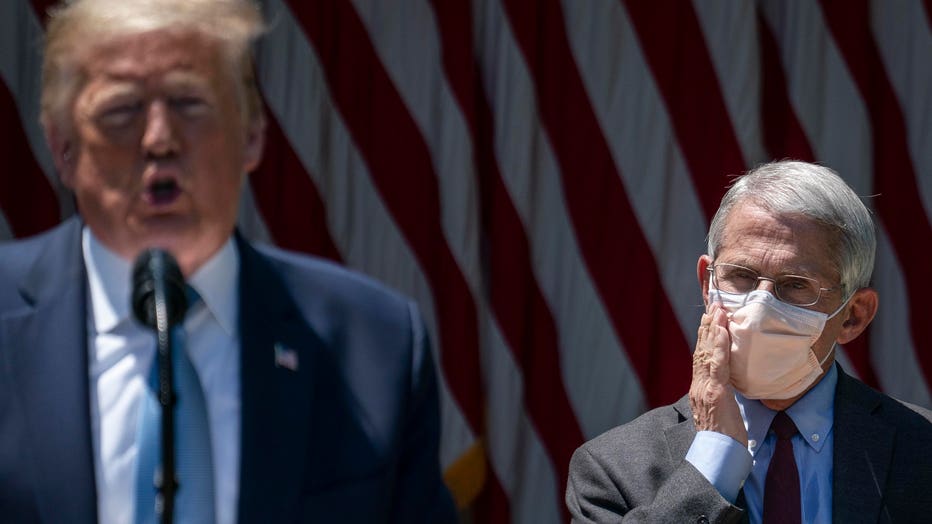 Dr. Anthony Fauci (R), director of the National Institute of Allergy and Infectious Diseases, looks on as President Donald Trump delivers remarks about coronavirus vaccine development in the Rose Garden of the White House on May 15, 2020 in Washingto

Fauci gave the comments in response to a question on whether Trump speaks to him about vaccine developments, to which he replied, “no.”

The director of the National Institute for Allergy and Infectious Diseases also told CNN on Monday that he had not spoken or met with Trump in two weeks and that their last interaction was on May 18 during a teleconference with state governors.

The task force last met on May 28 and last held a White House press briefing on May 22, according to the outlet.

Fauci’s statements come amid protests across the country to decry the death of George Floyd during an encounter with police in Minneapolis, prompting fears of widespread new transmission of the coronavirus. Demonstrations have taken place in every one of the 25 U.S. communities with the highest concentrations of new cases, including Minneapolis-St. Paul, Chicago, Washington, D.C., and Los Angeles, according to the Associated Press.

Public health experts fear the close proximity of protesters and their failures in many cases to wear masks, along with police using tear gas, could ignite more cases just as states loosen restrictions on businesses and public life that have helped slow the spread of the virus.

As of June 2, there were nearly 2 million confirmed cases of COVID-19 in the United States and more than 105,000 deaths, according to data compiled by Johns Hopkins University.

“As a nation, we have to be concerned about a rebound,” Washington Mayor Muriel Bowser warned Sunday after days of protests rocked the nation’s capital. New York Gov. Andrew Cuomo bemoaned the crowds, saying that hundreds could potentially have been infected, undoing months of social distancing.

Floyd died May 25 after a Minneapolis police officer pressed a knee into his neck for several minutes, even as he pleaded that he couldn’t breathe. Minneapolis has been ground zero for the sprawling protests, which have crossed the Mississippi River into neighboring St. Paul.

RELATED: The death of George Floyd: A timeline of a chaotic, emotional week in Minneapolis

The unrest has coincided with “the very worst days of the pandemic so far” in the Twin Cities metropolitan area, said Michael T. Osterholm, director of the Center for Infectious Disease Research and Policy at the University of Minnesota.

In the Stat interview, Fauci said the idea of having a vaccine by the end of the year is “aspirational, but it’s certainly doable.” Last week, he implored Americans to continue to be vigilant and practice recommended health protocols as states reopen in varied ways.