WASHINGTON (FOX 5 DC) - The mother of a baby missing since May 2021 was fatally stabbed in Northeast D.C., by the child's father according to DC Police.

On Wednesday, members of the Capital Area Regional Fugitive Task Force located and arrested 44-year-old Carl Jones, the missing baby's father in connection to the stabbing. The Northeast native was charged with second degree murder while armed. He is being held without bond.

The detectives’ investigation also revealed that the incident stemmed from a domestic dispute with Ladonia Boggs, 39, who was found inside a residence in the 1500 block of Benning Road NE suffering from an apparent stab wound around 2:52 a.m. on Wednesday morning.

DC Fire and Emergency Medical Services responded to the scene and after finding no signs consistent with life, the victim was transported to the Office of the Chief Medical Examiner.

Boggs was arrested in May 2021 for Felony Murder of her then 2-month-old missing son, Kyon Jones, but was not charged. She was only charged with Tampering with Evidence and was later released into Pretrial Services.

The mother of a missing 2-month-old in D.C. has been arrested and charged with murder.

Boggs first told the infant’s father around May 5 that Kyon would be gone "for a long time" because DC Child and Family Services (CPS) took him. Court documents say the father reached out to the agency trying to confirm this. 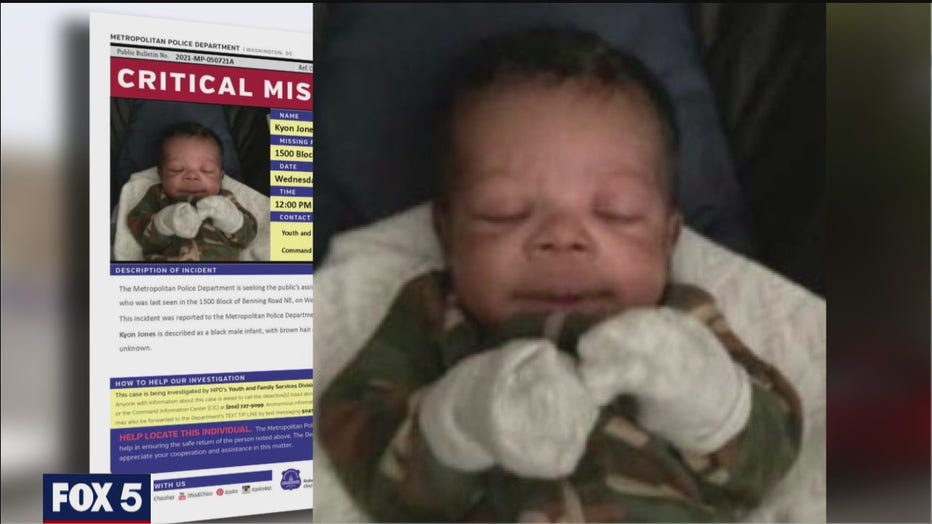 Investigators also noted that at one point, Boggs told detectives she did not want her baby because of what she and the child’s father were going through.

On May 8, police say Boggs called detectives to speak with them once more and admitted to sleeping in a bed with her son, and with the child "between her and a wall."

Boggs also said she woke with her stomach on top of Kyon. Boggs told investigators she found Kyon unresponsive and in another interview, said she panicked.

In that interview, Boggs reportedly said she fell asleep with her son on her chest, "rolled over, and noticed the baby was unresponsive."

Court documents say Boggs retracted her statement that she was high on PCP at the time of her arrest.

The infant’s father told detectives that Boggs’ drug use recently became worse but that he never observed Boggs acting physically abusive toward her children.

DC Police say the investigation into Kyon's disappearance and Boggs' death are both ongoing.