William Wayland has been banned from working in mortgage services in Maryland since 2014. The state attorney general announced Wayland’s conviction in a Montgomery County case last year and he was just indicted in Prince George’s County.

Robert didn’t want to use his last name because his mother doesn’t want to be identified. He said Wayland is continuing to call his mother and that he came to her home Christmas Eve to collect payment.

He said she’s paid Wayland nearly $15,000 over the last year. His mother tells FOX 5 she heard about Wayland through word-of-mouth, and started working with him to reduce her mortgage after her husband passed away.

”Once we started dealing with him, he informed my mom not to make her mortgage payments and that’s when he started to accept those payments in the name of mortgage relief,” Robert said. 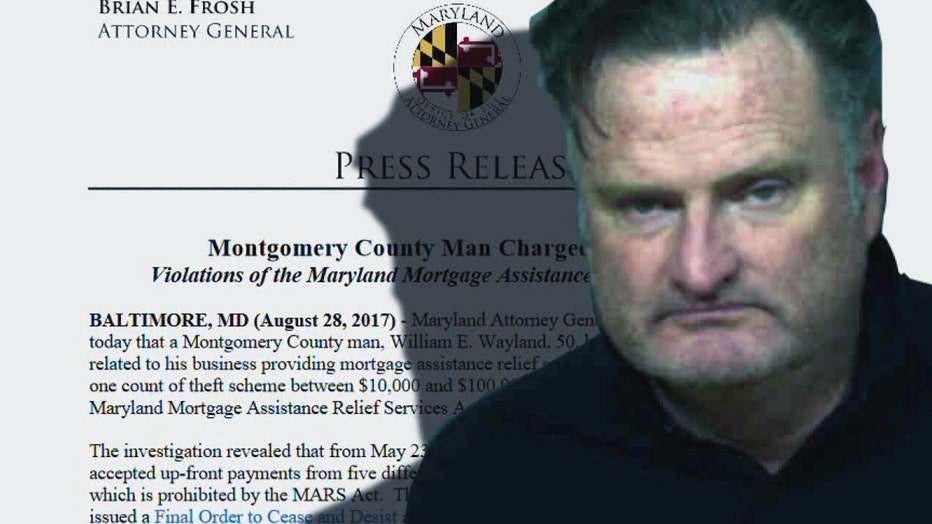 William Wayland has been indicted in connection with Patricia Duckett's case in Prince George's County.

According to court documents, Wayland pretended to be a lawyer and stole $7,000 from her. Duckett said he told her not to pay her mortgage and to pay him instead. She ended up losing her home to foreclosure.

“A relative was the first to see the story,” said Robert.

He said FOX 5’s coverage of Wayland is what made him start questioning his intentions.

“At this moment, there’s almost an unfathomable amount of uncertainty,” said Robert.

He’s still trying to figure out what’s happening with the house.

”Just looking up the address online it’s listed as being in the pre-foreclosure/ auction status, but my mother seems to be the owner of the home for now,” he said.

Wayland didn’t return her calls for comment. He’ll be in court for a bond hearing next week

Experts say be wary of anyone who promises to rescue you from foreclosure, tells you to stop paying your mortgage or instructs you to stop communicating with your mortgage lender. It is illegal in the U.S. to charge someone upfront for mortgage services.

There are many free resources available if you’re in need of help. To get connected to a counseling agency in Maryland call 1-877-462-7555 or click here.

Outside of Maryland, you can find a counselor by clicking here.

Robert and his mother said they’re meeting with one of those organizations in coming days.