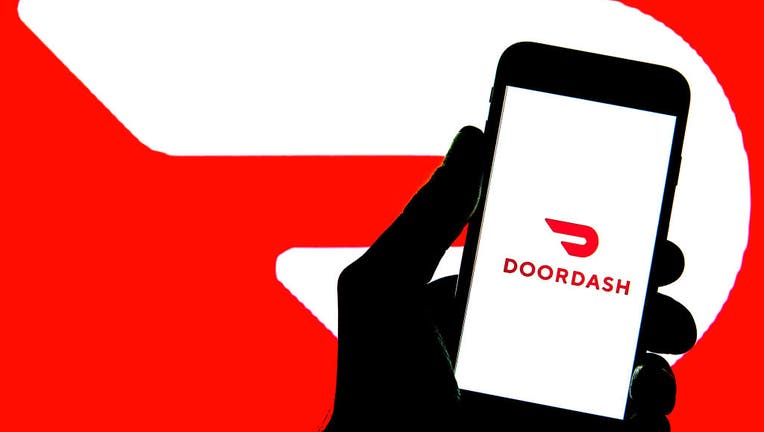 In this photo illustration, a DoorDash logo seen displayed on a smartphone. (Photo Illustration by Thiago Prudencio/SOPA Images/LightRocket via Getty Images)

SAN FRANCISCO - Food delivery company DoorDash said it will refund drivers for some U.S. gasoline purchases to help offset rising prices at the pump, another sign of companies growing increasingly concerned about the impact on drivers.

DoorDash said in a statement on Tuesday that it will give 10% cash back to all U.S. delivery drivers when they buy gas using DasherDirect, the company’s debit card designed for drivers. Drivers will get the cash back for any gas purchase, whether or not they are completing deliveries at the time.

"Over the last few weeks, prices at the pump have increased all across the world, and for Dashers who deliver by car, this economic reality presents unique and unprecedented challenges," the company said in a statement.

The gas rewards program will begin Thursday, the company said — and both programs will be in place "at least through April."

Houston officials are searching for gas thieves, accused of using a trapdoor in a minivan to steal gas from a local gas station.

Uber said riders would begin paying a surcharge of either $0.45 or $0.55 on each Uber trip and either $0.35 or $0.45 on each Uber Eats order, depending on their location — starting Wednesday.

"We know that prices have been going up across the economy, so we’ve done our best to help drivers and couriers without placing too much additional burden on consumers," Uber said in a statement. "Over the coming weeks, we plan to listen closely to feedback from consumers, couriers and drivers. We’ll also continue to track gas price movements to determine if we need to make additional changes."

Lyft didn’t specify the amount of its fuel surcharge.

Industry analyst Trilby Lundberg of the Lundberg Survey said Sunday that gas prices are likely to remain high in the short term as crude oil costs soar amid Russia’s invasion of Ukraine and global supply concerns.

But prices at the pump were rising long before Russia invaded Ukraine, as post-lockdown demand for gas has pushed prices higher.

Crude prices plummeted in early 2020 as economies around the world shut down because of COVID-19 — the price of futures even turned negative, meaning some sellers were paying buyers to take oil. Prices rebounded, however, as demand recovered faster than producers pulled oil out of the ground and inventories dried up.

Then, the price increase accelerated after the war began.