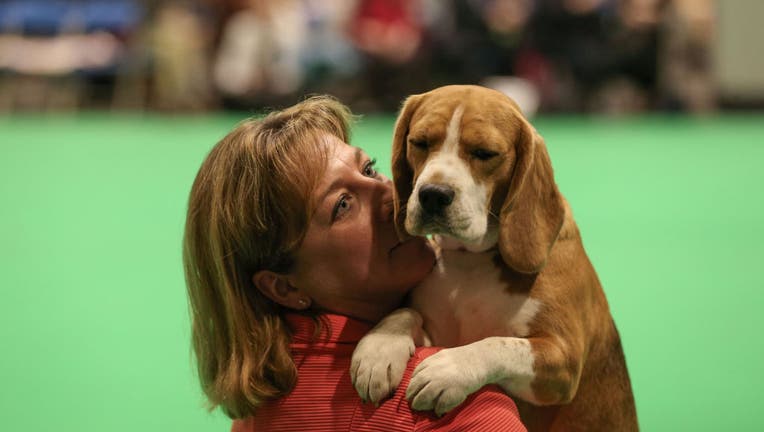 A Beagle dog hugs its owner on the second day of Crufts 2018 at the NEC in Birmingham. (Photo by Aaron Chown/PA Images via Getty Images)

A new study has revealed insight into dogs that many owners may already know and love.

The study, published Monday in Current Biology, said the eyes of man’s best friend can well up with tears of joy regularly when reunited with their owner.

"We found that dogs shed tears associated with positive emotions," Takefumi Kikusui of Azabu University in Japan said in a news release (https://www.eurekalert.org/news-releases/962142). "We also made the discovery of oxytocin as a possible mechanism underlying it."

Kikusui and his team made the discovery after his two standard poodles had puppies six years ago. Kikusui noticed that whenever his dog was nursing the puppies— he noticed tears on the dog's face, although they weren't falling like human tears.

RELATED: Dog blinded after ingesting oxycodone while on a walk at Palisades Park in Santa Monica

"That gave me the idea that oxytocin might increase tears," Kikusui continued.

Oxytocin is described as the "love hormone," according to Kikusui.

He then conducted an experiment.

Dog missing for 2 months found in cave by explorers

When the researchers added oxytocin to the dogs’ eyes, their tear volume also went up similar to the previous experiment. They said the result proves that the release of oxytocin plays a role in tear production when dogs and their people get back together.

Researchers then asked people to rate pictures of dogs’ faces with and without artificial tears in them. As a result,  people gave more positive responses when they saw dogs with teary eyes. Researchers believe the findings suggest that dogs’ tear production helps to build stronger connections between people and their dogs.

"We had never heard of the discovery that animals shed tears in joyful situations, such as reuniting with their owners, and we were all excited that this would be a world first!" Kikusui said.

"Dogs have become a partner of humans, and we can form bonds," he continued. "In this process, it is possible that the dogs that show teary eyes during interaction with the owner would be cared for by the owner more."

On the flip side, researchers haven’t yet tested whether dogs produce tears in response to negative emotions or if they get back together with other dogs.