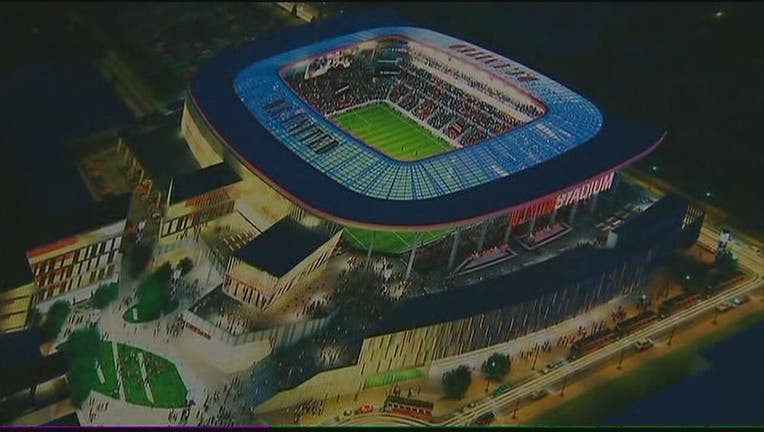 Could Virginia steal away D.C. United from the District? FOX 5 has learned D.C. leaders are working behind the scenes to make sure that does not happen.

The Washington Post reported D.C. United officials toured several areas in Loudoun County where a stadium could be built.

Currently, plans are to the build a state-of-the-art 20,000 seat stadium on Buzzard Point in Southwest D.C. just blocks from Nationals Park.

Sources say this is likely a move by D.C. United to get the stadium in the city built faster.

"I feel very confident standing here in front of you and say it's not going to happen," said Ward 6 D.C. Councilmember Charles Allen. "I think it's great. Virginia should try to be as competitive as they can, but D.C. United wants to be in D.C. -- and D.C. wants D.C. United right here."

But Loudoun County is pitching several sites that could be connected to Metro. Virginia Gov. Terry McAuliffe's office would not talk about a possible deal except to telling FOX 5, "Governor McAuliffe believes in competing for all economic development projects."

"When I hear these ideas of a football or soccer stadium way off in Loudoun County on a subway that hasn't been built yet and a road system that doesn't exist, I think it is always a mistake," he said. "You end up with a Fedex Field experience, which everybody hates."

On Twitter, we asked about our followers about moving the team? Many of the responses were against the idea.

New soccer stadiums not only get teams excited, but they drive development, and most importantly, they rally fans. Many United fans say they are tired of RFK Stadium and getting a new stadium was part of the deal to keep the team in D.C.

"We've got to move quickly," said Allen. "I think we should be aiming for the 2018 season. They need to be in there, be in the stadium and be up and running."

We are told that D.C. leaders understand this process needs to move faster. The issue is getting the land where the stadium will be built.

D.C. can use eminent domain and take the land now to begin the stadium project and battle over the price in court later.

A possible land swap with the Reeves Center on 14th Street has been mentioned, but when we attempted to ask Mayor Muriel Bowser about that, she was not available for comment.

It is unlikely that will happen and the mayor did not like that plan before and we are hearing she has moved on from that idea.