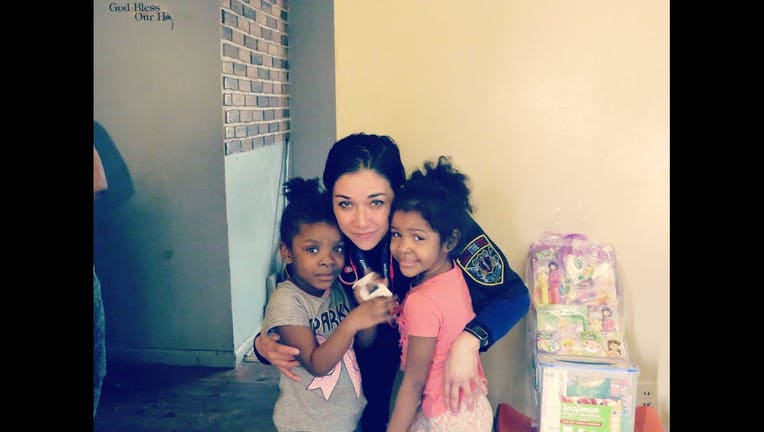 Last week, Detroit Police Sgt. Shannon Halligan Jones took to social media to share a heartbreaking story about a missing persons case she was assigned to. Jones said Deann Robinson was last seen in January of 2015 and in late February, on Leap Day, her body was located inside an abandoned home during a search. Jones was then tasked with the difficult job of notifying family members.

"Now I have done this time and time again, this is not the first and will not be the last. The thing that got me on this one are the 2 beautiful girls that Deann brought to this Earth. Miss Shianne (6 years old) is on my left and Miss Sienna (4) is on my right."

Jones, who has worked for the Detroit Police Department since 2000, said she attended a candle light vigil in front of the home where Robinson's body was located.

"Both girls saw me and ran to give me a hug. Miss Shianne then looked up at me and said 'You found my mommy, and you found the bad guy.' I told her yes, while my heart was breaking a little more inside. She is 6 years old and already knows that some bad man/men murdered her mother. I hate that it took such a tragic event for me to meet such a wonderful family."

See related: West side body found believed to be missing mother of two

Jones went on to say she's not sure what's in store for their future, but she'll always remain in close contact with them.

"I love them as if they were my own," Jones said. "So Deann, if you are listening, know that your little girls are safe!"

At the end of her post, she included a link to a GoFundMe account that has been set up in honor of Deann Robinson:

I wanted to share a story and a family who has touched my heart. I have been working for the Detroit Police Department...

Detroit police found Robinson's body in the basement of a home that had been abandoned for several years. Neighbors said they never noticed anything suspicious. Robinson's mom didn't either and was stunned to learned she had walked by the home every day.

"I've actually (been) passing her every morning, taking my niece to work...Never knew she was here for a whole year," said Latressa Giles said.

Police tracked down Robinson's 48-year-old ex-boyfriend, Jerry McCoy in Alabama. Police said he confessed and has been charged with murder.