Residents in a Prince George’s County community are fed up with people driving and crashing into their backyards.The latest collision occurred Tuesday after a car rammed into a tree on Elmhurst Street in District Heights, killing the driver. FOX 5's Ayesha Khan has the details!

DISTRICT HEIGHTS, Md. - Residents in a Prince George’s County community are fed up with people driving and crashing into their backyards.

The latest collision occurred Tuesday after a car rammed into a tree on Elmhurst Street in District Heights, killing the driver.

Police said the deadly accident happened around 8:30 a.m. The driver was traveling northbound on Aztec Drive when the car left the roadway and smashed into a tree.

Cell phone video shot by Imani Lawson shows the aftermath of how the car was completely wrapped around the tree in a neighbor’s yard.

"That tree I would call it is the tree of death," Lawson said.

Lawson was across the street when the deadly crash happened.

"It literally got me out of bed," she explained. "I came downstairs and said, ‘What’s going on?’ I thought someone hit my car. This accident is probably the fourth similar one of this year." 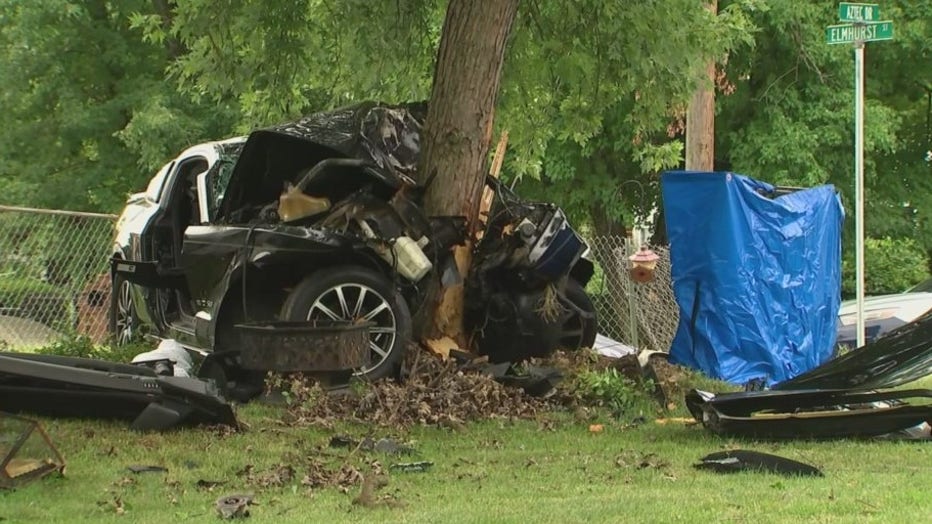 Lawson and other neighbors have been urging their elected officials to do something about what they say is a constant hazard.

"I’ve been asking District Heights for the last three or four years to put a guard rail there," said Sam Wilson. "Just a few weeks ago, I talked to some of the members down there, and they keep telling me there’s nothing in the budget."

While it’s unfortunate that someone died in this car crash, residents believe it could have been worse.

"Makes me feel unsafe because we BBQ normally in our yard," said Nika Brown. "Me and my daughter could have been sitting in the yard and the car could have hit one of us."

"Imagine if there were kids, and they were going to school today," Lawson added. "Some kid would have gotten killed today."

FOX 5’s Ayesha Khan reached out to the City of District Heights Commission for a comment regarding resident concerns, but we have not received a response yet.

Police have not yet released information on the identity of the driver or what caused the deadly crash to happen.

"The Mayor and Commission have just been made aware that this has been a recurring issue and will be working with our police and public works to install some type of barrier and other traffic-calming measures in the area. We value our residents and will be working to minimize future incidents of this nature."