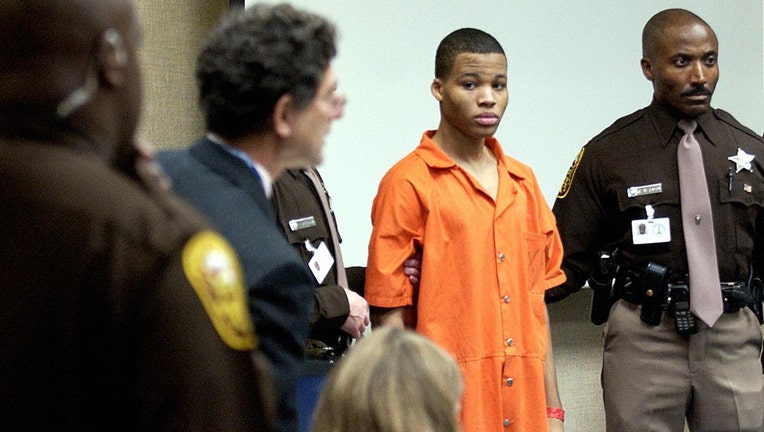 FALLS CHURCH, Va. - Lee Boyd Malvo, who is serving life in prison for his role in the 2002 sniper spree that terrorized the nation's capital region, is now a married man.

Carmeta Albarus, who has served as an adviser and mentor for Malvo since testifying at his 2003 trial, confirmed the wedding took place earlier this month. She said she attended the ceremony at Red Onion State Prison in southwest Virginia.

“Over the past 17 years, he has grown despite his conditions of confinement,” she said in a phone interview. “He has grown into an adult, and has found love with a wonderful young lady. ... It was a beautiful ceremony.”

She declined to identify the bride.

Malvo, now 35, was 17 when he and John Allen Muhammad embarked on a killing spree in October 2002 that left 10 people dead and three wounded in Maryland, Virginia and the District of Columbia. Others were killed as the pair made their way to the D.C. region from Washington state.

Muhammad was executed and Malvo was sentenced to life in prison without parole. Earlier this year, though. Virginia passed legislation that gives those who were under 18 when they committed their crime an opportunity to seek parole after serving 20 years. As a result, Malvo will be eligible for parole in 2024.

The change in the law prompted Malvo last month to drop a legal appeal that had gone all the way to the Supreme Court to determine if his life sentence should be rescinded.

Even if Malvo is granted parole in Virginia, he was also sentenced to life in prison in Maryland.

Rules in Virginia state prisons strictly regulate inmate weddings. Witnesses and guests are restricted to a maximum of six, and any refreshments served must be obtained from the prison vending machines. Also, according to the regulations, a wedding “shall not result in the granting of any special privileges for the consummation of the marriage following the ceremony or thereafter.”