The District used a new law for the first time ever — to take away a gun from a person deemed a danger to themselves or others.

WASHINGTON (FOX 5 DC) - D.C. Police used the District's Red Flag law for the first time to take away guns from someone determined by a judge to be a danger to themselves or others.

The Red Flag Law, also known as an Extreme Risk Protection Order, allows someone close to a person with access to a gun to petition a court to remove weapons from the subject if they are considered dangerous.

The law took effect in January, but in the first case using it, a police officer asked the court to remove guns from a man in Northwest D.C. after he exhibited odd behavior while trying to legally register a pistol.

The officer noted that the man was going through a divorce and had been investigated previously by police in Maryland and the District.

In the petition, the officer writes the man, "may be experiencing a mental health crisis." 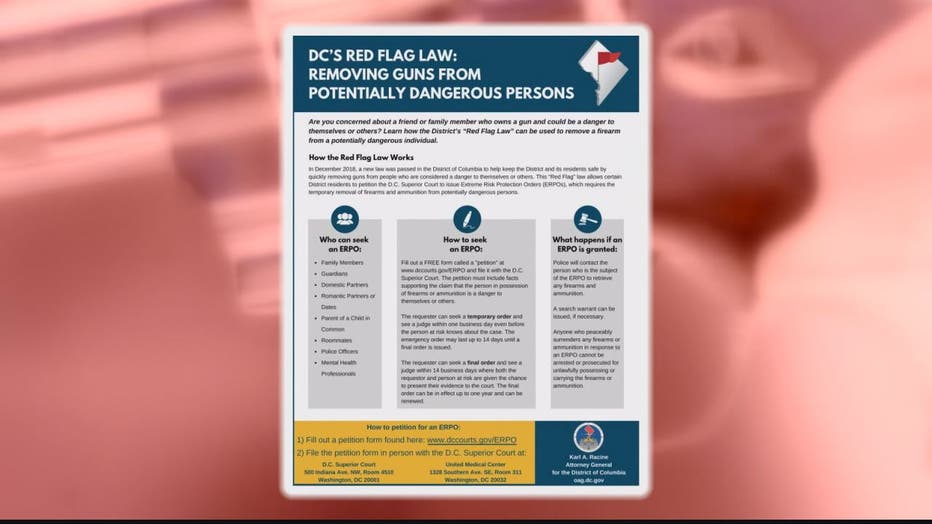 A hearing is scheduled on Monday in the case, where a judge will decide if the temporary order to take a pistol and rifle away from the man could extend up to a year.

The Office of the Attorney General for the District of Columbia is spreading word about the new law because not only police can use it.

Family members, a roommate or mental health professionals can file the paperwork with the court to remove guns from someone deemed dangerous.

In most instances, an initial hearing could happen on the same day the paperwork is filed.

"Anyone out there who sees someone that they are concerned about should not have a firearm because they could hurt themselves or others can do something," said Janese Bechtol, chief of the Domestic Violence Section of the OAG.

It can be filed at the D.C. Superior Court.