A community is taking action on what marks the one-year anniversary since a child was killed in the District after her bicycle rolled into a Northeast D.C. crosswalk as a car was coming. FOX 5’s Stephanie Ramirez reports from Northeast D.C. with that story.

WASHINGTON - Tuesday marks one year since 5-year old Allison Hart was struck and killed in a pedestrian crosswalk in northeast D.C. and many in the community say the street is still unsafe.

On Monday David Van Horn, who tells FOX 5 his daughter attended the same school as Allison Hart, sat outside of the intersection involved and posted some of what he saw on Twitter. This included multiple videos showing even a Metro bus caught, on video, rolling right through the stop sign by 14th and Irving Sts. NE. 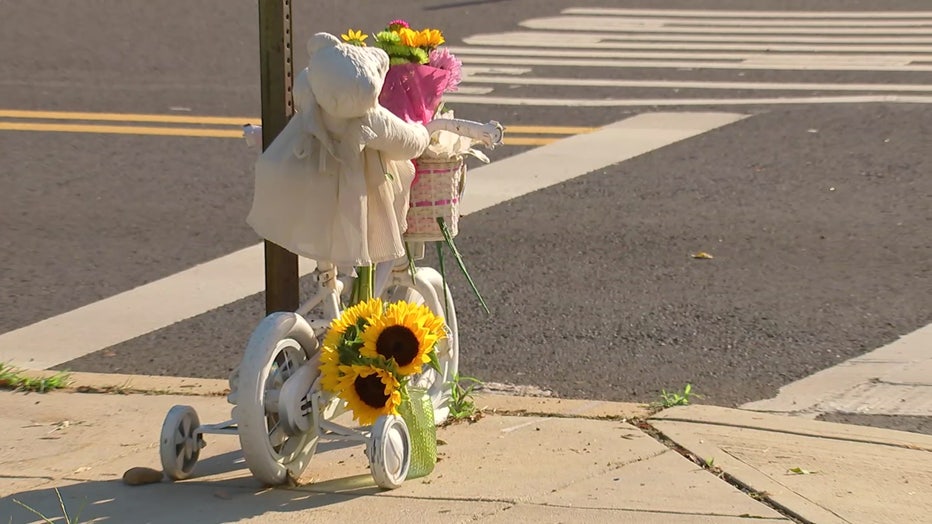 That intersection is where on Sept. 13, 2021 just before 7 p.m., police said a Royal Cab Transit van did come to a complete stop, however, the vehicle pulled forward as Allie Hart rode into the crosswalk on her bike, unable to stop.

Emergency crews rushed to the scene, but the young girl died from her injuries.

A child-sized "ghost bike" with training wheels now marks the spot where Allie's life was cut short. Allie's mother marked the intersection with a sign she made with pictures of her daughter using her child’s old glue sticks.

Tuesday marks one year since 5-year old Allison Hart was struck and killed in a pedestrian crosswalk in northeast D.C. and many in the community say the street is still unsafe.

FOX 5's Melanie Alnwick says action taken on the one-year mark, includes an "#All4Allie" Safe Streets Initiative Twitter campaign where the neighborhood’s ANC commissioner is encouraging people across the city to submit traffic-calming requests to DC 311 – and share it on social media, so residents can track progress in honor of Allie. And events like the "chalk-in" where they wrote safety messages and drew Allie's favorite pictures on the street.

An emotional family friend who came to view the ghost bike and makeshift memorials still sitting at 14th and Irving Street NE on Tuesday said, "I take Allie with me at every stop sign. So I’ll slow down, look around, hopefully there’s children around."

"We’re always in a rush, it’s back to school, back to work, back to sports, back to everything but nothing is that important. So it’s just always a reminder to pause and look around," Lily Buerkle added.

Buerkle told FOX 5 she wants to see a raised crosswalk along with flashing signs when children cross at the intersection constructed.

David Van Horn told FOX 5: "That intersection is no worse than basically any other intersection in the district. And so, you know what I did was sit at the intersection for a few minutes, and it’s overwhelming once you start looking at how bad the driving is – and again in particular –  by, you know, operators for city agencies. If we can’t have a culture of safety coming from the city itself, I don’t know how we’re ever going to have safe streets."

Metro’s General Manager did respond to the video showing the Metro bus rolling through the intersection where Allie was killed without coming to a full stop.

"Thx you for sharing these videos. While clearly an issue involving diff types of vehicles RE: the Metro bus, I've sent this to the team to investigate," Metro General Manager Randy Clarke tweeted. "Our operators have a tough job but must also ensure they are operating safely, especially for the most vulnerable roadway users."

However, Van Horn told FOX 5 it was more than one bus he saw rolling through and claims the Metro busses were not the only city vehicles ignoring the traffic command.

A District Department of Transportation spokesperson provided this statement:

The District Department of Transportation was deeply saddened by the tragic loss at 14th and Irving Street NE last year, and our thoughts remain with the friends and family of Allie Hart as they continue to mourn her. In the immediate aftermath of the incident, DDOT installed short-term safety measures, including raised speed humps, to lower speeds near this location, school legends applied to the roadway, extra signage, and parking restriction signs. In addition, the crossing distances were shortened with curb extensions. As a longer-term effort, DDOT is currently studying corridor-level concepts for 14th St to calm traffic further, and will be presenting them to the community in the months to come. DDOT is also looking at opportunities such as our Automated Enforcement cameras, that could further promote safety. We will also work with our sister agencies to reinforce traffic safety behavior for DC government vehicles. In the District as a whole, DDOT’s vision for long-term change to our transportation system is outlined in our long-term plan, moveDC, which prioritizes safety as our #1 goal. Our goal in every project we complete – be it small area paving, street design, or even major capital construction projects – is to focus on improving the safety of all roadway users. DDOT will continue our relentless pursuit of the Vision Zero goal - to reach zero fatalities and serious injuries to travelers of our transportation system through more effective use of data, education, enforcement, and engineering.