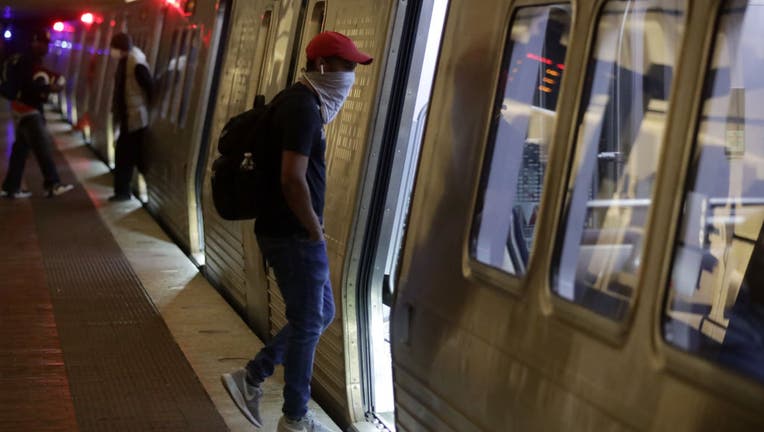 WASHINGTON, DC - APRIL 07: A passenger wears a mask as he enters a Metro train car at Metro Center Station April 7, 2020 in Washington, DC. Washington Metropolitan Area Transit Authority announced that it is cutting late night service and closing all

According to the board, they need to account for drastic losses of revenue brought on by service limitations that were implemented when the District, Maryland and Virginia fought to slow the spread of the novel coronavirus.

They say ridership and revenue dropped by as much as “90 percent on some lines.”

According to officials, they’ve been kept afloat by CARES Act funding.

They say Metrorail trips account for 28 percent of their operating budget – and ridership on the Metrorail has dipped to 12 percent of what they had before the arrival of COVID-19 in March.
The cuts include:

- Reduced Metrorail service: Weekday train service every 6 minutes on the Red Line and every 12 minutes on the Blue, Orange, Green, Yellow, and Silver lines

- Continue reduced Metrobus service levels and hours, instead of adding service in early 2021 as planned.