DC Mayor Muriel Bowser announced her 2021 budget on Monday, with the District facing massive shortfalls in the wake of the coronavirus pandemic.

WASHINGTON - D.C. Mayor Muriel Bowser revealed her proposed budget for 2021 – a budget that seeks to account for massive shortfalls prompted by the COVID-19 pandemic.

In light of the numerous challenges posed by the pandemic, the mayor noted that she's proud of the budget they're developed.

To help buttress the gaps caused by shortfalls, the administration says it will freeze wage increases for four years, but they will not lay off any District employees.

The District budget was helped significantly by using its once-vast reserves. 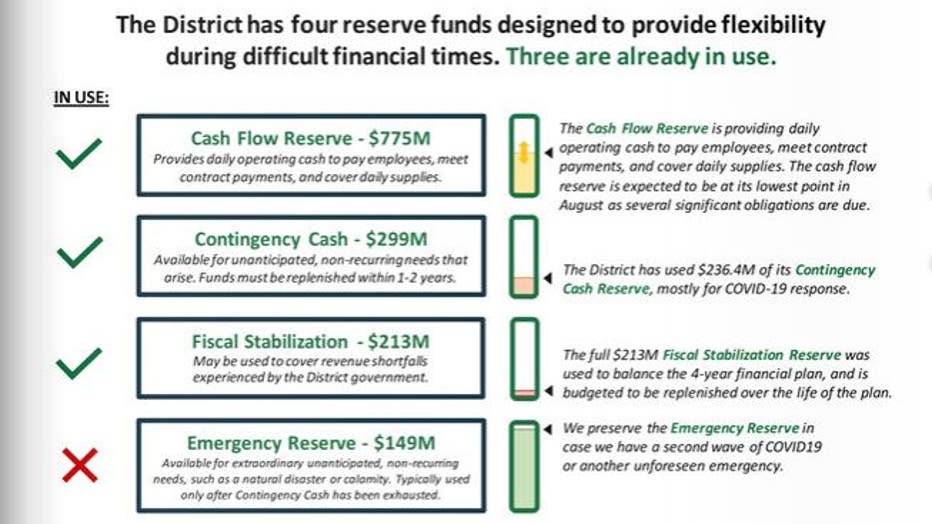 The budget will include a significant portion of the District’s $775 million cash-flow reserves, and $236.4 million of its $299 million contingency fund.

The proposal reflects challenges cities and states are facing nationwide in the wake of the COVID-19 outbreak.

The mayor’s budget will need to be approved by the City Council, which meets on Tuesday.

City Council President Phil Mendelsohn says he thinks “this is a good budget.”