Call the police if you see someone not wearing a mask. That’s the advice from&nbsp;Mayor Muriel Bowser to businesses and residents in the District.

WASHINGTON (FOX 5 DC) - Call the police if you see someone not wearing a mask. That’s the advice from Mayor Muriel Bowser to businesses and residents in the District.

On Wednesday, Bowser said that while police should be called, they can’t be expected to respond to all violations for the city’s coronavirus-related restrictions. That’s why she said, that police need the help of community leaders to enforce public mask-wearing.

She was also asked about local businesses and how many of them are sometimes hesitant to have their employees ask people to wear masks because they are afraid of retaliation and she answered by simply advising to call the police.

And when asked about whether MPD will enforce the order when they are called, Bowser didn’t say if fines or arrests would be issued. 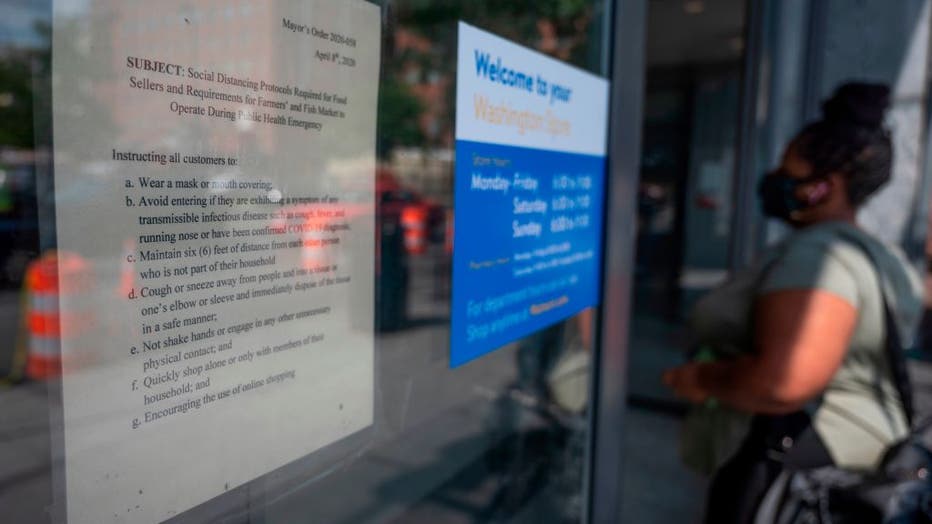 A woman wearing a facemask enters a Walmart store next to a sign with social distancing rules in Washington, DC on July 15, 2020. (Photo by ANDREW CABALLERO-REYNOLDS/AFP via Getty Images)

Bowser was also asked about a large block party for a concert in Oxon Run Park in Southeast from over the weekend where many people were allegedly seen not wearing face masks and not social distancing. Police were there but were not seen enforcing mask rules.

DC Mayor Muriel Bowser provides an update on the city's response to the novel coronavirus.

Meanwhile, some local restaurants, like Slipstream in Southeast, told FOX 5’s Ayesha Khan that they have not had any real problems but now that the mayor encourages calling 911, they won’t hesitate to do so.

“If someone absolutely refuses to wear a mask I would ask them to leave,” said Aaron Kahn-Bork. “If I ask someone to leave and they were any issues with that, calling the police would be the next step as the last resort, I’ve had to do it before at other workplaces.”

Bowser also clarified some information about the city’s recently published list of 27 states that are considered high-risk for COVID-19.

She said that college students coming from any of those states who are attending colleges and universities in the District will need to self-quarantine on the campus or in off-campus housing.

She also mentioned that while she has not spoken with beach town mayors or the governor of Delaware, she does empathize with them about the loss of economic activity due to being on the travel quarantine list.