A new bill would allow restaurants in D.C. to keep their outdoor dining fixtures through the end of 2023.

WASHINGTON - The outdoor dining tents that popped up during the pandemic could be sticking around.

The D.C. Council unanimously approved a first reading of legislation introduced by Mayor Muriel Bowser who's all for extending the outdoor eating arrangements. 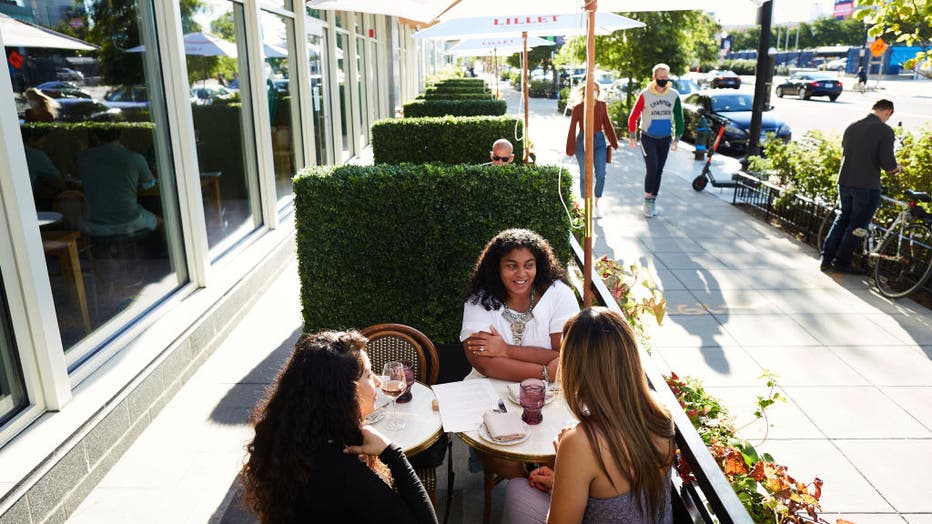 WASHINGTON, DC - SEPTEMBER 19, 2020: Vanessa Rivera enjoys the outdoor dining area on the side of the restaurant with her friends left to right: Jacqueline Carvajal and Desiree Luna at Jackie photographed in Washington, DC on September 19, 2020. (Pho

The "Reopen D.C. Act" would allow restaurants to keep their outdoor dining fixtures through the end of 2023. It would also make it easier for restaurants that don’t have outdoor seating to be able to get it.

Youssef Bidar, the owner of Thunder Burger on M Street in Georgetown, tells FOX 5's David Kaplan the outdoor seating option for him has been a big deal.

"It has been a big, big relief, and a big help," Bidar said. "We’ve been through a lot of hard times, all the food business, industry around the country. And in Georgetown, M street, here, it is what we do."

The proposed bill will permit certain areas to allow open containers with the proper licensing. That means, as it’s currently laid out, neighborhood groups can potentially get so-called commercial lifestyle licenses that would allow specific areas to have open containers.

It would incentivize grocery stores opening up in Wards 1 through 6 to open them up in wards 7 and 8. And it would set up a licensing mechanism for alcohol sales through delivery apps like Uber and Doordash.

The bill got unanimous approval during its first reading, but there are some concerns out there about it. Some provisions have beverage distribution groups worried. Others believe the setup for these potential open container zones is unfair.

And here in Georgetown, a neighborhood group has some concerns about the ease with which restaurants would be able to have outdoor dining. They're emphasizing they support restaurants, but want to have some say about a potential explosion of outdoor dining.

"We support outdoor dining. But this legislation is a change in that normally there would be a period for public comment when a summer garden was proposed. But this legislation takes away that right," said Tara Sakraida Parker, the president of the Citizens Association of Georgetown. "And so neighbors do not have an opportunity to comment whether or not a summer garden next to their home is good or bad.

The bill passed unanimously in the council yesterday. There’s one more reading. If it passes, it’ll go to Mayor Bowser, who pushed for this bill.