According to NASA, the Geminids are considered to be one of the best and most reliable annual meteor showers.

LOS ANGELES - Stargazers, grab your binoculars: The annual Geminid meteor shower will peak mid-December and is expected to light up the night sky.

According to NASA, the Geminids are considered to be one of the best and most reliable annual meteor showers.

“The Geminids first began appearing in the mid-1800s. However, the first showers were not noteworthy with only 10 - 20 meteors seen per hour,” NASA explained. “Since that time, the Geminids have grown to become one of the most major showers of the year.”

The meteors tend to be bright, yellow and quick, and during its peak, 80-120 Geminid meteors can be seen per hour under ideal conditions. 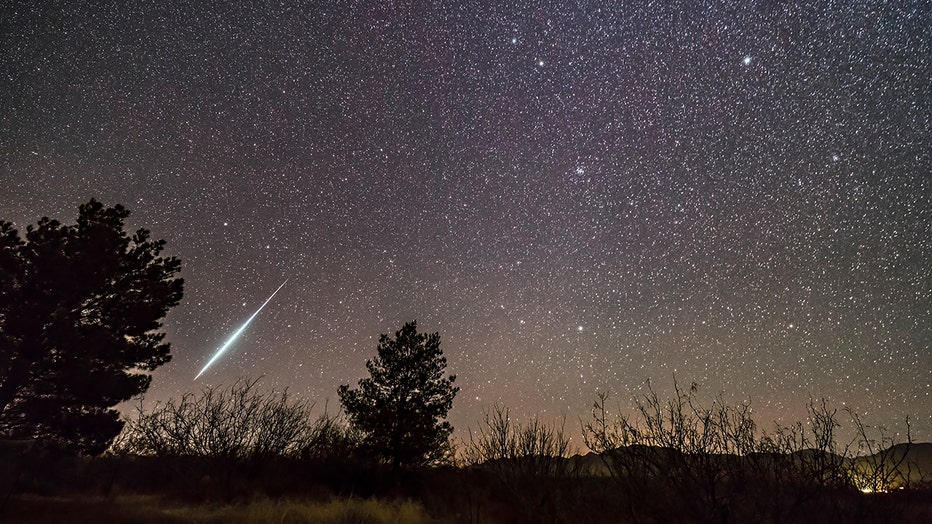 A single bright meteor from the Geminid meteor shower of December 2017.

“Scientists puzzle over how this asteroid can act so much like a comet, leaving behind a trail of debris that sparks the meteors,” EarthSky wrote.

The shower will peak Dec. 13-14 (Sunday evening until dawn Monday), meaning viewing at this time will be best opportunity to observe the meteors. However, you can begin seeing meteors during its active period beginning Dec. 4. through Dec. 17.

The Geminids are best viewed at night and pre-dawn hours, starting around 9 p.m. in a dark, open sky away from city or street lights.

RELATED: NASA mission touches down on asteroid Bennu: Here’s what you need to know

EarthSky said the ideal time to view the meteors is specifically at 2 a.m. for all parts of the globe, because “that’s when the shower’s radiant point – the point in our sky from which the meteors seem to radiate – is highest in the sky. As a general rule, the higher the constellation Gemini the Twins climbs into your sky, the more Geminid meteors you’re likely to see.”

Keep in mind, temperatures in December can drop to freezing levels in North America, so be prepared for colder temperatures, and give yourself at least one hour of viewing time if you can.

“After about 30 minutes in the dark, your eyes will adapt and you will begin to see meteors. Be patient — the show will last until dawn, so you have plenty of time to catch a glimpse,“ NASA said.