A frightening scene was captured on video Thursday morning when a driver's dashcam caught a vehicle speeding in the wrong direction at oncoming traffi on Interstate 66 in Virginia. (VIDEO: Cliff Crittenden)

ARLINGTON, Va. - A frightening scene was captured on video Thursday morning when a driver's dashcam caught a vehicle speeding in the wrong direction at oncoming traffic on Interstate 66 in Virginia.

The video was taken by motorist Cliff Crittenden who was driving on I-66 near Route 29 in the Arlington area at about 10:50 a.m.

In the video you can see a red vehicle driving westbound in the eastbound lanes of I-66 -- partly in the fast lane and partly in the narrow shoulder. The video shows Crittenden's vehicle swerving to the right to miss the oncoming car. A rear-facing camera picks up the vehicle as it continues in the wrong direction. 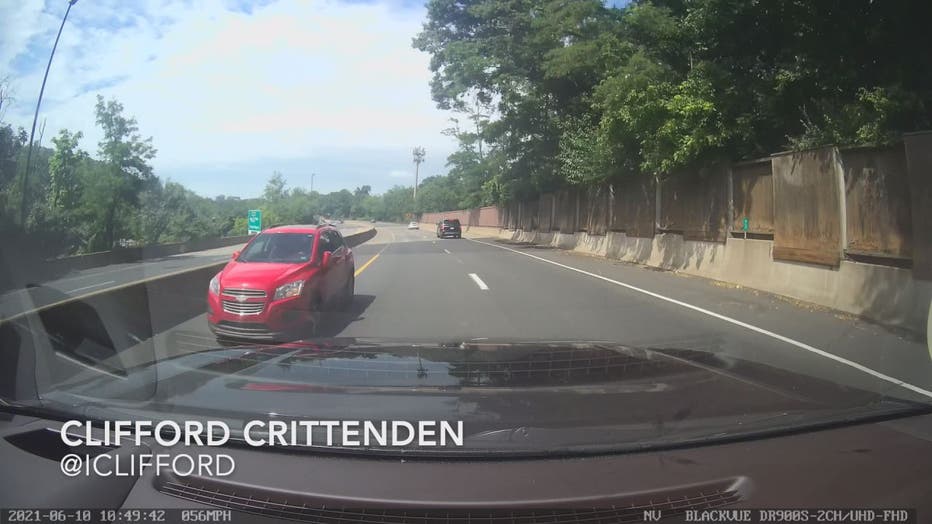 Virginia State Police said they received calls as early as 10:36 a.m. that a vehicle was traveling north in the southbound lanes of Interstate 495 near Exit 51. They say the wrong-way driver then got onto I-66 before a flat tire forced them off the road near Rosslyn. Police say the vehicle struck at least one other vehicle.