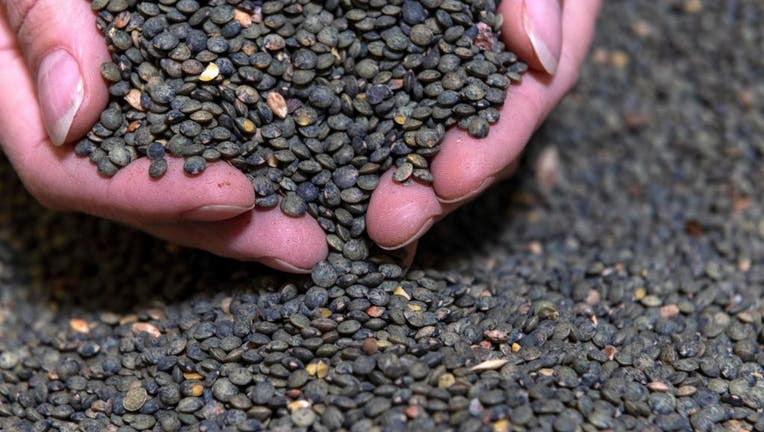 FILE IMAGE - An individual holds green lentils at a plant in Chaspuzac, near Le Puy-en-Velay, central France, on Oct. 7, 2020. (Photo by THIERRY ZOCCOLAN/AFP via Getty Images)

Meal service delivery company Daily Harvest has temporarily discontinued its French Lentil + Leek Crumbles product after several customers posted online that they became severely ill and even went to the emergency room after consuming it.

In a warning notice Sunday, the company announced that it received an undisclosed number of customer reports that the "French Lentil + Leek Crumbles has caused gastrointestinal issues."

The warning came days after several Daily Harvest customers posted on a Reddit thread that they had stomach pain that was so severe that they had to go to the hospital.

13 HOSPITALIZED IN HEPATITIS A OUTBREAK TIED TO STRAWBERRIES

"Two weeks ago I tried the crumbles for the first time. That night, I had debilitating stomach pain, like nothing I had ever felt before," one Reddit user wrote on a thread that had over 260 comments. "It was so bad I had to go to the ER as a last-ditch effort to alleviate and manage the pain."

Many users replied saying they had similar experiences.

"Last Saturday I ate these for lunch. That night experienced the worst stomach pain I’ve ever felt. Led me to the ER on Sunday with what doctors assumed was appendicitis," another user replied. "Fever, dark urine, severe abdominal pain and nausea, itchy skin, the works."

Another user said they had the "worst abdominal pain" of their life and claimed their hospital visit cost over $20,000.

The company said it immediately took steps "to address what we heard from customers."

Plant-based foods are on the rise

More and more restaurants are the country are adding vegan and vegetarian options to their menus.

This included reaching out to every person who received the French Lentil + Leek Crumbles product and instructing them to throw it out.

The company also said it launched an investigation "with internal and external experts throughout our supply chain and in accordance with regulatory procedures." Daily Harvest said it plans to update customers when it gets more information.

In the meantime, the company put "temporarily discontinued" over the product image on its website.

After the company's warning notice was posted, several other customers posted to Twitter that they became very ill and spent time in the hospital.

"Okay, so this is what made me deathly ill last weekend," a Twitter user wrote.

"Our mission has always been to take care of food so food can take care of you," the company wrote. "That means quality, safety, and transparency are and always will be our top priorities."

Daily Harvest said it will follow up with any concerned customers by email.