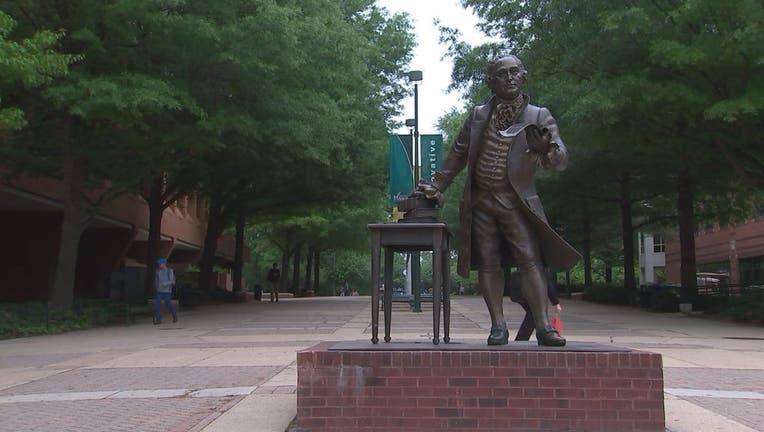 FAIRFAX, Va. (AP) - A $50 million gift made earlier this year to Virginia's largest public university was given specifically to "promote the conservative principles of governance," newly released documents show, raising concerns from critics that it compromises academic freedom at the school.

George Mason University announced the gift earlier this year — the largest ever received in the school's history — from the estate of Allison and Dorothy Rouse to Mason's Antonin Scalia Law School.

Documents obtained by the group UnKoch My Campus under the Freedom of Information Act and made public this week show that the Rouse trust specified its bequest be used "as an endowment to fund a chair or chairs that will promote the conservative principles of governance, statesmanship, high morals, civil and religious freedom and the study of the United States Constitution."

University officials say the Rouse trust won't have any say in selecting faculty at the law school and that there was nothing improper about specifying conservative governance as a principle to be promoted.

"What has been outlined in the agreement are important topics for any law school, and many of these topics are already an integral part of the curriculum at the Scalia School," Provost S. David Wu said in a statement.

But when school administrators presented the deal to the university's gift acceptance committee last year, it appears they knew the language in the bequest was problematic. A copy of the minutes obtained by The Associated Press shows that the word "conservative" was dropped from a description of the gift. Instead the minutes say that the gift will be used to "promote the principles of governance, statesmanship, high morals, civil and religious freedom and the study of the United States Constitution."

In a statement, Wu said the minutes "are not intended to be an exact transcript of the event." He said the gift acceptance committee "had a chance to review the full language in the bequest and discussed the merit of these areas, and the committee found them to be consistent with the educational mission of most law schools."

The school has faced criticism over the years that large contributions from conservative donors, including the Charles Koch Foundation, have tilted the public university's academics to the right. Last year the school faced criticism when documents showed that some agreements with the Koch Foundation gave donors a say in the hiring and firing of some professors at the university's Mercatus Center, a free-market think tank, in exchange for millions of dollars. The revelations about those provisions came after years of assurances from top university officials that the relationship with the Koch Foundation had no such provisions.

The university responded to those criticisms last year by revising its gift-acceptance policies to be more transparent. But the university still refuses to release details about some existing agreements. The Virginia Supreme Court will hear arguments next month about whether donor agreements must be subject to the Freedom of Information Act.

Bethany Letiecq, a Mason professor and member of the university's Faculty Senate, said the provision in the Rouse gift was problematic.

"Having that word 'conservative' in there really raises concerns about academic freedom," Letiecq said. "If you don't follow conservative principles, then what?"

George Mason, which has developed a reputation over the years as a conservative powerhouse in law and economics, has received increased scrutiny about influence of conservative donors since 2016, when Mason renamed its law school for conservative jurist Antonin Scalia. The renaming came in conjunction with an anonymous $20 million donation to the law school that was accompanied by $10 million from the Koch Foundation.

The Koch Foundation now gives hundreds of millions of dollars to universities across the nation, but tax records show that George Mason has received more money from over the years from the foundation than any other school.

Del. Marcus Simon, D-Fairfax, who led an unsuccessful effort to block Mason from naming the law school for Scalia, said the Rouse gift poses the same sorts of problems as the Scalia gift. And he said the fact that the word "conservative" was omitted from the minutes of meeting of the gift-acceptance committee is akin to "consciousness of guilt" on the administration's part.

"Everyone says the right things about academic freedom, but their actions continue to follow this troubling pattern," he said.

For the Rouse gift, the documents obtained by UnKoch My Campus show that Mason administrators identified and targeted Dorothy Rouse as a potential donor as far back as 2014. Allison Rouse was a judge appointed by then-Gov. Ronald Reagan to the California Court of Appeals in 1971. He died in 2005. Dorothy Rouse was an attorney who died in May 2018.