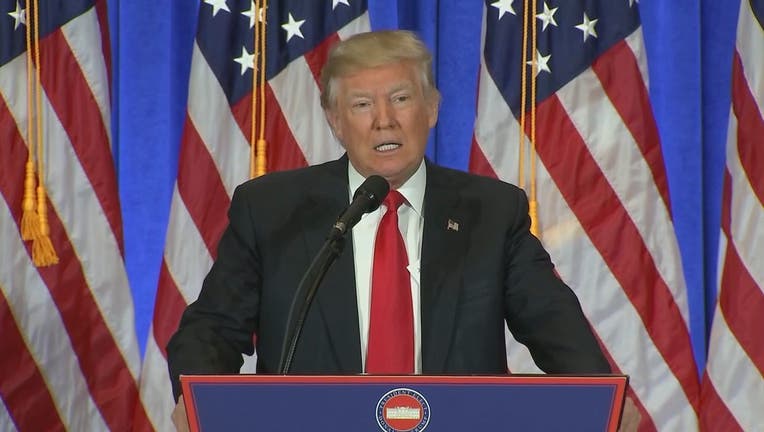 NEW YORK (AP) -- In a combative and freewheeling news conference, President-elect Donald Trump said for the first time Wednesday that he accepts Russia was behind the election year hacking of Democrats that roiled the White House race. Looking ahead, he urged Congress to move quickly to replace President Barack Obama's signature health care law and insisted anew that Mexico will pay the cost of a border wall.

The hour-long spectacle in the marbled lobby of Trump's Manhattan skyscraper was his first news conference since winning the election in early November, and the famously unconventional politician demonstrated he had not been changed by the weight of his victory.

He defiantly denied reports that Russia had collected compromising personal and financial information about him, lambasting the media for peddling "fake news" and shouting down a journalist from CNN, which reported on the matter. His family and advisers clapped and cheered him on throughout.

Trump's transition has been shadowed by U.S. intelligence assessments that Russia not only meddled in the election, but did so to help him defeat Democrat Hillary Clinton. After spending weeks challenging that idea, Trump finally accepted at least part of the intelligence conclusions.

"As far as hacking, I think it was Russia," Trump said, quickly adding that "other countries and other people" also hack U.S. interests. Still, he kept needling the intelligence agencies, saying it would be a "tremendous blot" on their record if officials were leaking information from his classified briefings.

One U.S. official told The Associated Press Tuesday night that intelligence people had informed Trump last week about an unsubstantiated report that Russia had compromising personal and financial information about him. Some media outlets reported on the document, which contains unproven information alleging close coordination between Trump's inner circle and Russians, as well as unverified claims about unusual sexual activities by Trump. The AP has not authenticated any of the claims.

Wednesday's news conference was initially billed as a chance for Trump to answer questions about his plans for distancing himself from his sprawling, family-owned real estate and licensing business. Lawyer Sheri Dillon stepped to the lectern midway through the event to announce that the president-elect was relinquishing control of the Trump Organization to his adult sons and an executive, as well as putting his business assets in a trust. While new international business deals will be banned, the company will be allowed to start new projects in the U.S.

The move appears to contradict a previous pledge by the president-elect. In a tweet last month, Trump said that "no new deals" would be done while he was in office.

With dramatic flair, Trump aides piled stacks of manila folders on a table next to the lectern -- in front of 10 American flags -- before the news conference began. Trump said the folders contained documents he had signed formalizing the new business arrangements, though journalists were not able to view and independently verify the materials.

Some 250 journalists crammed into the Trump Tower lobby for the news conference, which was not only Trump's first since the election, but his first since July. Journalists shouted for his attention. At times, he skipped past questions he appeared to not want to answer, including an inquiry about whether he would keep in place sanctions Obama slapped on Russia in retaliation for the election-related hacking.

Until Wednesday, Trump had spent most of his two months as president-elect doling out policy pronouncements, attacks on critics and boasts about his victory in 140-character increments on Twitter. His preferred mode of communication has left some of his positions vague -- an approach that is often by Trump's design.

The president-elect set some concrete policy markers Wednesday, though specifics continued to be in short supply on some of his major campaign promises.

He promised that a replacement for Obama's sweeping health care overhaul would be offered "essentially simultaneously" with a congressional vote to repeal the measure. The complexity of the policy changes makes quick passage of a new health care law virtually impossible, and Trump is yet to detail what he wants included. He said his team would send a plan to Congress after Rep. Tom Price, his pick to lead the Department of Health and Human Services, is confirmed.

Turning to his plans to build a wall along the nation's southern border, Trump vowed that Mexico would "reimburse" the cost of the project through an unspecified tax or payment. He said that while his administration would begin negotiating with Mexico after his Jan. 20 inauguration, he did not want to delay the work until an agreement was reached, raising the prospect that U.S. taxpayers could ultimately bear the costs.

"I want to get the wall started," he said. "Mexico will pay for the wall, but it will be reimbursed."

Trump also moved to complete his Cabinet picks, announcing his intention to nominate David Shulkin to lead the Department of Veterans Affairs, elevating him from his current role as VA undersecretary. He suggested that Shulkin may work with major private hospitals to help address issues that have plagued veterans' health care.

Trump said he would move quickly to fill the Supreme Court vacancy left by the death of Justice Antonin Scalia. He said he had been interviewing candidates and seeking input from conservative groups and planned to name someone about two weeks after the inauguration.