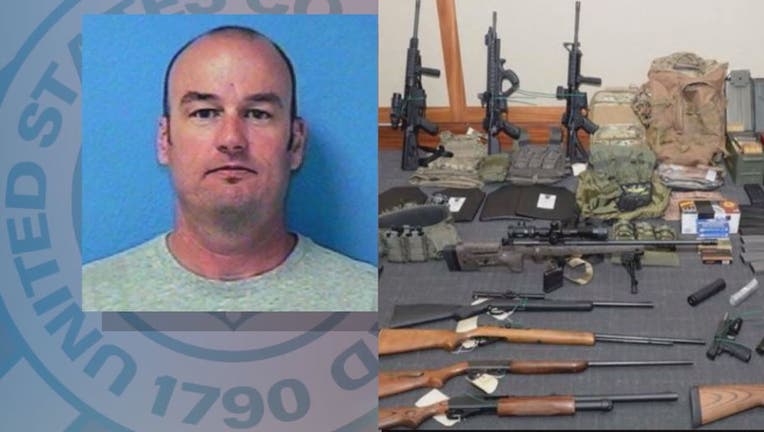 The notice says Hasson is asking the 4th U.S. Circuit Court of Appeals to review his conviction, judgment, sentence and “all other adverse rulings and orders” in the case.

Hasson pleaded guilty in October to possessing unregistered and unserialized silencers, being a drug addict in possession of firearms and illegal possession of tramadol, an opioid painkiller.

Justice Department prosecutors didn’t charge him with any terrorism-related offenses, but the judge agreed to apply a “terrorism enhancement” that significantly increased the recommended range of a prison term under the federal sentencing guidelines.

Prosecutors recommended a 25-year prison sentence for Hasson. They called him a domestic terrorist who appeared to be planning attacks inspired by the manifesto of Anders Behring Breivik, the Norwegian far-right terrorist who killed 77 people in a 2011 bomb-and-shooting rampage.

In a 2017 letter he apparently wrote to a neo-Nazi leader, Hasson identified himself as a white nationalist of more than 30 years and “advocated for 'focused violence' in order to establish a " white homeland," according to prosecutors.

Defense attorneys urged Hazel to spare Hasson from prison and sentence him to jail time served since his February 2019 arrest. Hasson’s lawyers accused Justice Department prosecutors of fabricating a bogus narrative that the married father of two grown children was planning a terrorist attack.

In February 2018, Hasson searched online whether Supreme Court justices are "protected,” two weeks before he searched for the home addresses of two Supreme Court justices, according to a prosecutor. During Hasson's Jan. 31 sentencing hearing, Hazel said he believe d the officer was preparing to carry out a “mass casualty assault as a way to act out his white nationalist views."

Hasson told the judge he has never harmed anybody in his life and wasn't planning to hurt anyone “in any way, shape or form.”

Investigators found 15 guns, including seven rifles, and more than 1,000 rounds of ammunition when they searched Hasson's basement apartment in Silver Spring, Maryland.

In September, Hazel refused to dismiss the gun charges against Hasson. The judge rejected a defense argument that charging Hasson with unlawful possession of firearm silencers violates his Second Amendment right to bear arms.