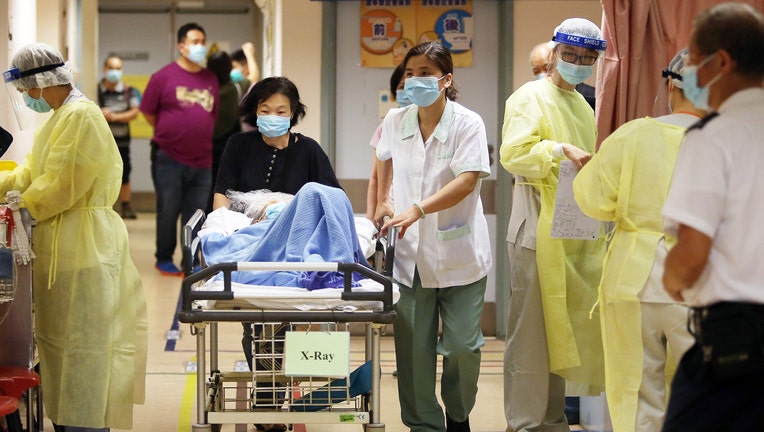 BEIJING (AP) - China closed off a city of more than 11 million people Thursday, halting transportation and warning against public gatherings, to try to stop the spread of a deadly new virus that has sickened hundreds and spread to other cities and countries in the Lunar New Year travel rush.

Police, SWAT teams and paramilitary troops stood guard at entrances to Wuhan's train station. Travelers were arriving up to the last minute, with only those holding tickets for the last trains allowed to enter. Virtually everyone at the scene was wearing masks, news website The Paper's live broadcast showed.

At exactly 10 a.m., metal barriers were placed over entrances while helpless would- be travelers milled in front. People who were booked on trains beyond the deadline were turned away, with some complaining they weren't notified and now had nowhere to go.

City residents appeared to be going about their daily business, while taking preventive measures. People lined up to buy face masks, with pharmacies limited sales to one package per customer. Medical workers wore protective suits outside Wuhan Medical Treatment Center, where some patients with the viral respiratory illness are being treated.

Local authorities have demanded all residents wear masks in public places and urged government staff to wear them at work and for shopkeepers to post signs for their visitors, Xinhua quoted a government notice as saying.

"Those who disregard the warning will be punished according to relevant laws and regulations," the notice said.

Virtually no one would be allowed to leave Wuhan, an industrial and transportation hub in central China's Hubei province. Train stations, the airport, subways, ferries and long-distance shuttle buses were closed. The official Xinhua News Agency. It cited the city's anti-virus task force as saying the measures were taken in an attempt to “effectively cut off the virus spread, resolutely curb the outbreak and guarantee the people's health and safety.”

Li Bin, deputy director of the National Health Commission, had warned people in Wuhan on Wednesday to avoid crowds and public gatherings.

The illnesses from a newly identified coronavirus first appeared last month in Wuhan, and the vast majority of mainland China's 571 cases have been in the city. Other cases have been reported in the Thailand, the United States, Japan and South Korea. One case was confirmed in the southern Chinese territory of Hong Kong after one was earlier confirmed in Macao. Most were people from Wuhan or had recently traveled there.

A total of 17 people have died, all of them in and around Wuhan. Among the victims, the average age was 73, with the oldest aged 89 and the youngest 48.

The significant increase in illnesses reported just this week come as millions of Chinese travel for the Lunar New Year, one of the world's largest annual migrations of people.

The coronavirus family includes the common cold as well as viruses that cause more serious illnesses, such as the SARS outbreak that spread from China to more than a dozen countries in 2002-2003 and killed about 800 people, and Middle Eastern respiratory syndrome, which developed from camels.

The first cases in the Wuhan outbreak were connected to people who worked at or visited a seafood market, which has since been closed for an investigation. The head of the Chinese Center for Disease Control said the outbreak may have resulted from human exposure to wild animals at first but the virus also may be mutating. Mutations can make it deadlier or more contagious among people.

“We are still in the process of learning more about this disease,” Gao Fu, the CCDC head and an academician of the Chinese Academy of Sciences, said at a Wednesday news conference.

Also Wednesday, the World Health Organization put off deciding whether to declare the outbreak a global health emergency and has another meeting set for Thursday.

WHO defines a global emergency as an “extraordinary event” that constitutes a risk to other countries and requires a coordinated international response.

“We cannot say they have done something unusual,” he said.

Some countries have stepped up screening measures for travelers from China, especially those arriving from Wuhan. North Korea has banned foreign tourists, a step it also took during the SARS outbreak and in recent years due to Ebola.

China has been credited for responding rapidly to this outbreak, in stark contrast to how it withheld information for months on SARS, allowing the virus to spread worldwide.

One veteran of the SARS outbreak said that while there are some similarities in the new virus — namely its origins in China and the link to animals — the current outbreak appears much milder.

Dr. David Heymann, who headed WHO’s global response to SARS in 2003, said the new virus appears dangerous for older people with other health conditions, but doesn’t seem nearly as infectious as SARS.

“It looks like it doesn’t transmit through the air very easily and probably transmits through close contact,” he said. “That was not the case with SARS.”