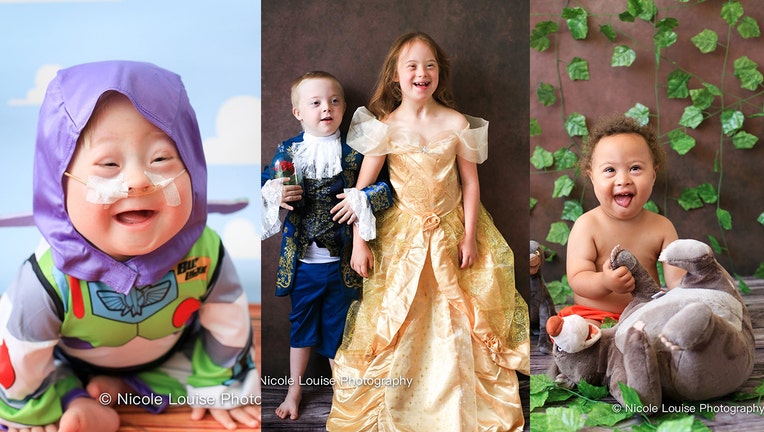 UNITED KINGDOM (FOX 5 DC) - A photographer launched a 12-day campaign called "Down with Disney" to spread awareness and show people the beauty of Down syndrome.

Nicole Perkins works full-time at a special needs secondary school in the U.K. and during her free time, she runs a photography business that primarily focuses on kids and young adults.

By combining her love for children and photography, she has created heartwarming campaigns for people with special needs. The first one launched in 2018 called ‘Down with Beautiful’ where she featured 32 different babies, children, teens and young adults with Down syndrome.

I created this because the abortion rate in the UK alone is that 90% of women will terminate their pregnancy if there is a chance of their baby having Down Syndrome.

Perkins told FOX 5 because she works in a school around people with Down syndrome the statistics break her heart, which is why she works to spread awareness on the beauty of the disability.

“There is something so special about people with Down Syndrome and the more people who realize that the better.” Perkins told Fox 5, “They really do make the world a better place.”

Because last year’s campaign was more informative-- which included family stories and advice for new parents-- she wanted a more playful setting for 2019’s shoot.

I absolutely love Disney and it’s truly magical so I thought it would be perfect.

She went under the sea to kickoff  'Down with Disney' in a Little Mermaid themed photoshoot featuring a 4-month-old baby girl named Aurora Marney.

On day two, 2-year-old Zephaniah Ojar ventured to the jungle and discovered the simple bare necessities.

A 6-year-old named Leiya Cooper made a wish upon a star—and it came true on day five.

Day six lead to adventures in a whole new world for Abdullah Adnan, 2, and Maryam El-Khamisi, 7.

There were no frozen hearts on day nine, only smiles and laughter from Lauren Rusler, 6, Poppie Underwood, 6, and 5-year-old Evan Williams.

"You’ve got a friend in me" took a whole new meaning on day 10 for Jackson Vaughan, 2, and baby Rory Haywood.

Day 11 baby Jaxon Jones flew in the direction of the second star to the right straight on till morning.

And finally, on day 12, 6-year-old Chloe Lennon discovered how brave she truly is.