Scientists create vodka made with grains, water from Chernobyl

A group of scientists from the United Kingdom and Ukraine made an experimental vodka called Atomik Vodka that was distilled with grains and water from the Chernobyl exclusion zone.

UNITED KINGDOM - A team of scientists from the Ukraine and United Kingdom created an experimental bottle of vodka made from grains and water in the Chernobyl nuclear exclusion zone.

The “artisan vodka” that is not radioactive is called Atomik. While only one bottle was made, the team hopes to produce more of the spirit and sell it to help the community affected by the Chernobyl nuclear accident.

“More than 30 years after the accident, we believe that what these areas need most is economic development and management of the unique wildlife resource the abandoned areas represent,” the Atomik Vodka website states.

On April 26, 1986, a nuclear reactor exploded in Chernobyl, killing two plant workers. Twenty-eight other people died within weeks of the blast from acute radiation poisoning, according to the World Nuclear Association.

About 106 workers received high doses of radiation and became ill, according to the U.S. Nuclear Regulatory Commission.

As the country worked to deal with the radiation fallout, a more than 2,600-mile human exclusion zone was ordered and 300,000 people were permanently displaced from their homes.

But professor Jim Smith, with the University of Portsmouth in the U.K., said he and his Ukrainian colleagues hope creating and selling Atomik vodka will allow the region to recover economically. If they can produce the alcoholic beverage, they plan to give 75 percent of the profits back to the community.

According to the Atomik Vodka website, the team created the Chernobyl Spirit Company to produce the “high quality” moonshine. 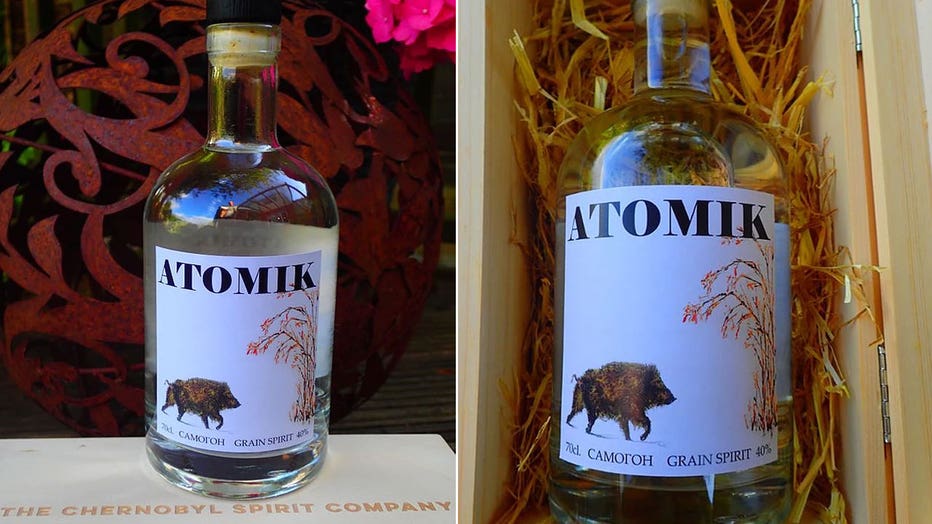 “I think this is the most important bottle of spirits in the world because it could help the economic recovery of communities living in and around the abandoned areas,” Smith said. “Many thousands of people are still living in the Zone of Obligatory Resettlement, where new investment and use of agricultural land is still forbidden.”

On the beverage’s website, the team explains that the idea for the vodka came about as they studied the transfer of radioactivity to crops in the exclusion zone and in the Narodychi District that is part of the obligatory resettlement area.

Land in those areas cannot be used for agriculture, but people live there.

“The research shows that in many areas land could now be used to produce crops which are safe to eat,” the website states. “We have used distillation to reduce radioactivity in the grain even further to make a product from Chernobyl which we hope people will want to consume.”

According to the University of Portsmouth, the team found radioactivity in the grains. Strontium-90 was detected and it came out slightly above the cautious Ukrainian limits. But because the distillation process reduces impurities from the original grain, the only radioactive matter detected in the alcohol was natural Carbon-14. It had the same levels found in a typical spirit.

Scientists diluted the distilled alcohol with mineral water taken from a deep aquifer in Chernobyl, which is about 6.2 miles south of the reactor. The water is free from contamination, according to the University of Portsmouth.

“Thirty-three years on, many abandoned areas could now be used to grow crops safely without the need for distillation,” Smith said. “We aim to make a high-value product to support economic development of areas outside the main exclusion zone where radiation isn’t now a significant health risk.”

Chernobyl has made headlines this year in the wake of the popular HBO series of the same name. It has sparked a rise in tourism and even caused a bit of an uproar as Instagrammers traveled to the exclusion zone to pose for pictures.