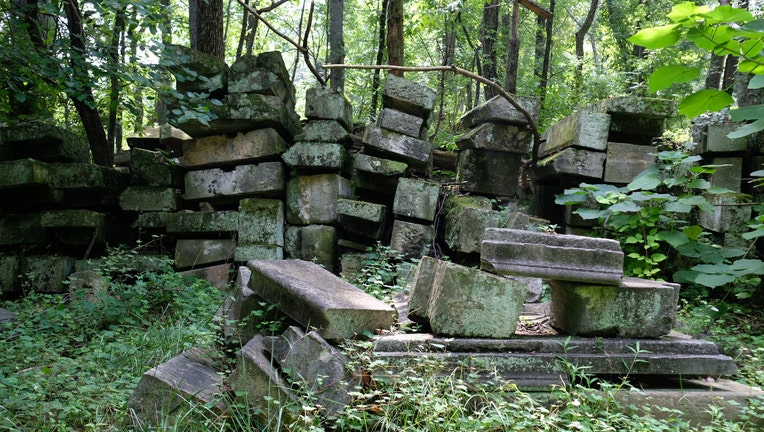 WASHINGTON, DC - AUGUST 17: Stones that were once part of the east facade of the U.S. Capitol are piled near a trail in Rock Creek Park. (Photo by Calla Kessler/The Washington Post via Getty Images)

WASHINGTON (FOX 5 DC) - The Capitol Stones in Rock Creek Park are an unofficial D.C. monument. Now, a plan to have them removed is receiving support and pushback.

The old stones are from the original U.S. Capitol and have been fenced off. The question is: are the stones better off where they were left nearly 50 years ago near a Rock Creek Park Maintenance facility or should they be out of public view and preserved?

The Architect of the Capitol says the plan is to move them out, according to Bloomberg News. It's a move supported by the US Capitol Historical Society.

FOX 5 did not hear back from the Architect of the Capitol’s office on Tuesday. However, Bloomberg is reporting the plan is to slowly and methodically take the stones out and move them to a warehouse to be preserved in Fort Meade, Maryland.

It’s a plan opposed by D.C. Congresswoman Eleanor Holmes Norton who wants a meeting with the Architect and the Park Service to try and stop this plan.

"Look, they’re stones, and at Fort Meade, they would be out of the public reach altogether," Congresswoman Norton says. "They have become a tourist attraction, and I don’t want to take that away from DC residents or the tourists to the nation’s capital."

Norton says she hasn’t heard back on her request for a meeting.