State officials are still debating on when Beach Drive at Rock Creek Park should be open and for whom.

State officials are still debating on when Beach Drive at Rock Creek Park should be open and for whom.

The National Park Service's new proposal to only close the roadway to drivers from Memorial Day to Labor Day is causing mixed feelings.

People who enjoy walks, and like riding their bikes in the area are happy that the road has been closed off to cars since the Pandemic, however, neighbors who live in the communities along the park say it's caused a lot of traffic near their homes.

FOX 5 spoke with Julia Washburn, the Superintendent of Rock Creek Park, who says the National Parks' proposal is all about compromising.

Washburn believes the changes will protect the park's natural resources and history, and also allow everyone to access the park, including people with mobility issues and the elderly. 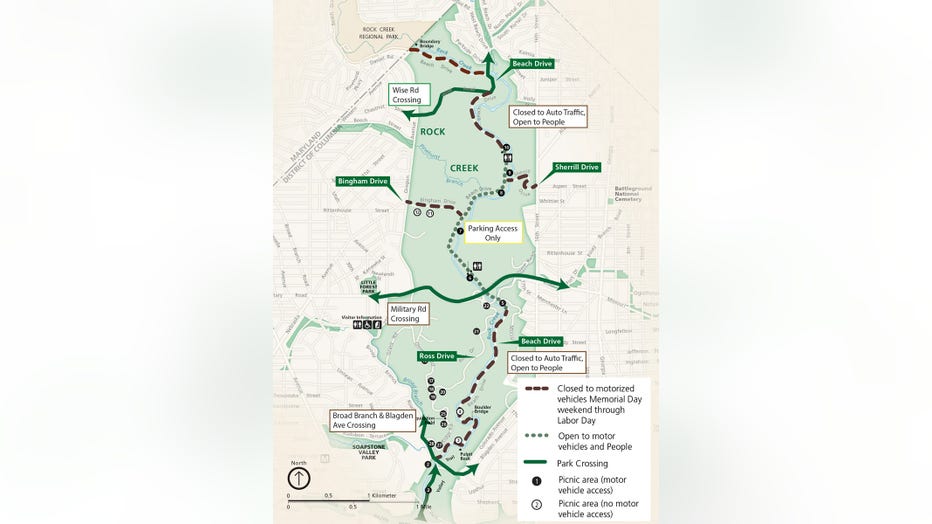 "So, while it’s (the road) closed, it does allow better accessibility for some people with mobility impairments," Washburn said. "For those who have severe mobility impairments or may be elders, they may never be able to get down through the most scenic part of the park because the only way they can access is through vehicles."

The NPS website states the seasonal closure would include Bingham Drive, Sherrill Drive and Beach Drive in three sections: From Broad Branch Road to Joyce Road, Picnic Area 10 to Wise Road, and part of West Beach Drive to the Maryland boundary.

One cyclist told FOX 5 he understands, but if approved, he's going to miss having the free road to ride his bike on.

"For me, it's being able to zone out and not treating it like rush hour, that’s what you have to do when you’re on River Road," Alex Lynch said. "This was a great avenue, a lot of elevation. There’s not a lot of places in D.C. where you can do hills."

Rick Cutis, who lives in the Crestwood neighborhood, said he thinks it's "preferable to leave it open for walking during the workweek and during the winter."

The National Park Service will hold a meeting next month to determine the future of a long section of Beach Drive.

While some residents in the area — including Mr. Curtis — are against the seasonal closure, one neighbor who also lives in the Crestwood neighborhood believes it's time to reopen the road to get the traffic out of the adjacent neighborhoods.

"It just increases traffic. It increases the number of cars running stop signs," said Dallas Salisbury, a Crestwood homeowner. "It basically just makes it far less pleasant in what has generally been a very quiet neighborhood. I’ve lived in it for 40 years."

There is a public meeting on the proposal scheduled for next Monday at 6:30 p.m. The National Park Service is encouraging the public to come and be a part of the planning process.