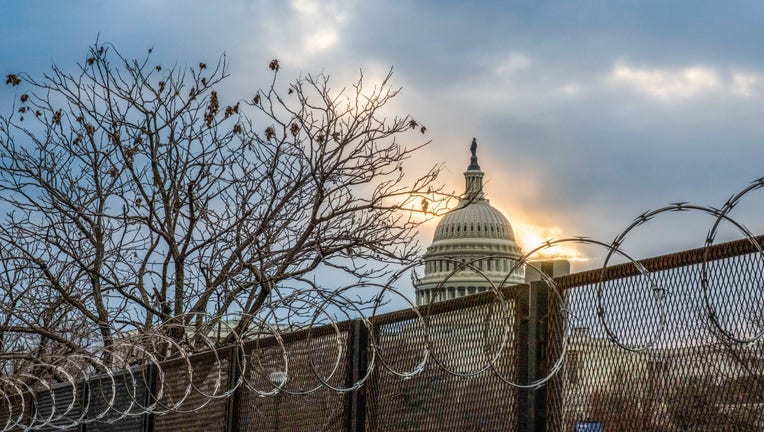 Razor wire and fences still surround the United States Capitol building at sunrise a few days after the inauguration of President Joe Biden and Vice President Kamala Harris. The Capitol was breached during an insurrection January 6 just days before t

WASHINGTON - The terrace on the west side of the Capitol used to be a popular place for tourists and Washingtonians alike to watch the sun dip behind the Lincoln Memorial at the far end of the National Mall.

The terrace has been closed to the public ever since.

It’s a sad fact of life in the nation’s capital that security measures are seldom temporary.

So when the Capitol police force’s acting chief said permanent fences around the Capitol complex should be part of the "vast improvements" in security needed to protect the building and the lawmakers who work inside, the reaction from members of Congress, local lawmakers and neighborhood residents was swift and emphatically negative.

"DC does not support it," said Councilmember Charles Allen, whose district includes the Capitol Hill neighborhood.

Rep. Jennifer Wexton, D-Va., said on Twitter, "I believe we can keep Members, press, staff, my constituents, and all those who work here safe without walling off the symbol of our democracy. It’s the People’s House—let’s keep it that way."

A petition being circulated online at change.org against making permanent the temporary fences that were erected after a mob loyal to President Donald Trump stormed the Capitol on Jan. 6 had roughly 1,500 signatures by mid-afternoon Friday. "Visitors and residents of DC would be punished by a permanent fence, a permanent scar on our beautiful city, and would lose access to this beautiful beacon of democracy," the petition reads.

The grounds of the Capitol attract crowds for public events, daily exercise, even intimate moments.

Allison Cunningham, the petition’s drafter, remembers going to the Capitol grounds to watch the Discovery space shuttle on its final flight atop a 747 in 2012.

"It’s a beautiful and unique place where people love to walk their dogs, take family photos or photos to announce their engagement," said Cunningham, a former Hill staffer who lives in the area and works in government affairs.

Security doesn’t have to be unsightly, said Susan Piedmont-Palladino, an architecture professor and coordinator of urban design at Virginia Tech.

She pointed to the creation of a pedestrian plaza in front of the White House that grew out of the decision to close Pennsylvania Avenue to vehicular traffic following the bombing of the federal building in Oklahoma City in 1995.

"We have gotten some beautiful improvements to the city out of fear," Piedmont-Palladino said.

Of course, the plaza and the adjacent Lafayette Park also have been closed since the summer, blocked by fences similar to those at the Capitol.

Asked Friday whether the president would consider taking down that new fencing at the White House, press secretary Jen Psaki said while "we’d all like" for it to be removed, she had nothing further to share on the issue.

The Supreme Court also is blocked off from the public by temporary fences.

When the court invoked security concerns to close its front doors to the public in 2010, Justice Stephen Breyer lamented what would be lost with people no longer able to enter the building by climbing 44 steps beneath the iconic phrase "Equal Justice Under Law" etched in the pediment above.

"To many members of the public, this Court’s main entrance and front steps are not only a means to, but also a metaphor for, access to the Court itself," Breyer wrote, adding that "potential security threats will exist regardless of which entrance we use."

To Piedmont-Palladino, the real challenge in what she called an ongoing minuet between security and access "doesn’t involve keeping people away. It involves making that space more welcoming to civic behavior," she said.