Chants of "Sammy! Sammy!" followed one of many important saves he made in Washington’s 6-1 rout of Florida in Game 3 on Saturday. Samsonov rebounded after allowing an early goal and the Capitals bounced back from a blowout loss in Game 2 to take a lead in the series against the Presidents’ Trophy-winning Panthers. 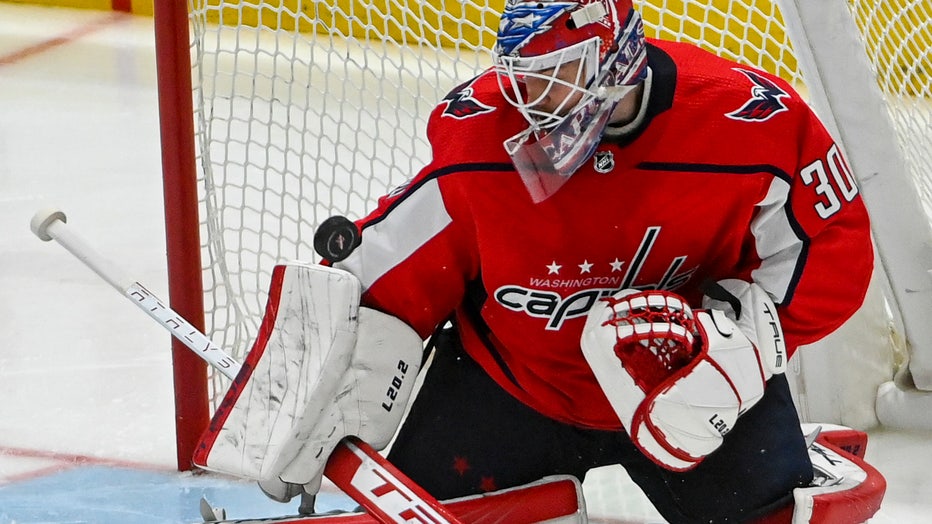 WASHINGTON, DC - MAY 7: Washington Capitals goaltender Ilya Samsonov (30) makes a third period save against the Florida Panthers during game three of the first round of the Stanley Cup playoffs at Capital One Arena. Photo by Jonathan Newton/The Washi

Samsonov made 29 saves in his first start this postseason, taking over for Vitek Vanecek and giving teammates and coach Peter Laviolette exactly what they hoped for out of a goaltender whose play ranges from stellar to suspect. From big saves in tight on Florida captain Aleksander Barkov to the stop on Sam Reinhart that ignited the chants, this was the best of Samsonov at the most opportune time.

"I am ready all the time," he said. "Sometimes you start playoffs, sometimes another goalie, but you need to get ready for every game. I understand if you want to win, you need to win 16 games."

The Capitals would take two more this round to start. Game 4 is Monday in Washington. 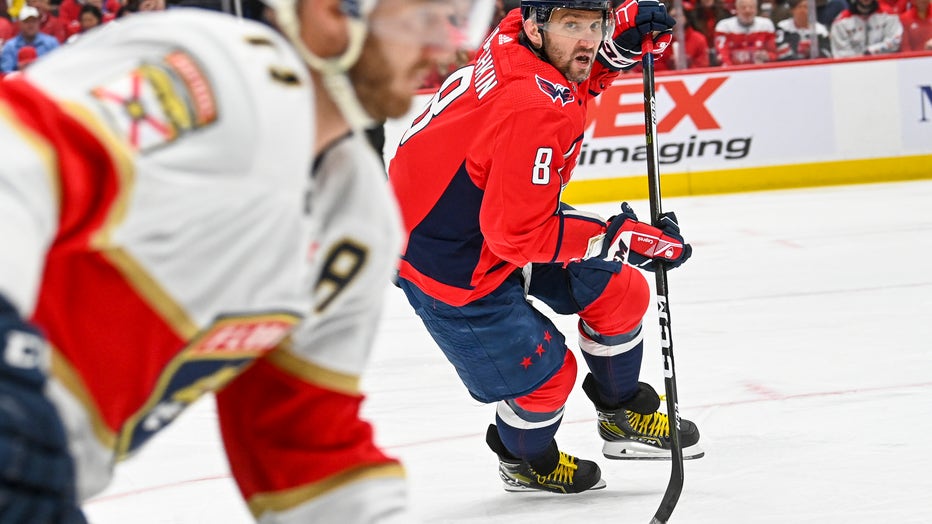 WASHINGTON, DC - MAY 7: Washington Capitals left wing Alex Ovechkin (8) eyes Florida Panthers left wing Jonathan Huberdeau (11) in the first period during game three of the first round of the Stanley Cup playoffs at Capital One Arena. Photo by Jonath

Alex Ovechkin scored on the power play and assisted on T.J. Oshie’s power-play goal. Marcus Johansson, Trevor van Riemsdyk and Garnet Hathaway also scored and John Carlson contributed an empty-netter for the Capitals, who shook off a 5-1 loss in Game 2 and an early deficit in Game 3 behind the play of their new starting goaltender and a stingy effort that stymied the NHL’s best regular-season offense.

"We all know playoffs have their swings and momentums," said Oshie, who redirected Ovechkin’s shot past Sergei Bobrovsky for his goal. "A team wins one game, the other team is going to make some adjustments and come at you twice as hard the next game. They did that in Game 2 and it was our turn to respond in Game 3, and I think the boys did a really good job from the drop of the puck all the way through."

Samsonov got the nod over Vanecek in net after stopping all 17 shots in relief Thursday. He got off to a rough start, giving up a goal to league MVP candidate Jonathan Huberdeau less than three minutes in — then stopped every shot he saw the rest of the way.

With Samsonov the backbone at even strength and short-handed, Washington’s penalty kill improved to 9 of 9 against Florida, which ranked fifth on the power play this season at just under 25%. The Panthers also led the league in scoring at more than four goals a game. 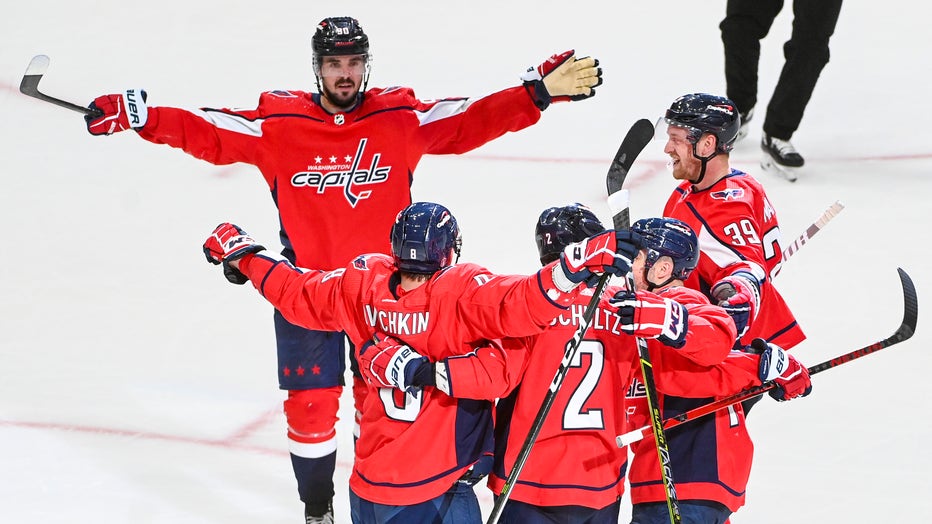 WASHINGTON, DC - MAY 7: Washington Capitals left wing Alex Ovechkin (8) is greeted by his mates after scoring a third period goal against the Florida Panthers during game three of the first round of the Stanley Cup playoffs at Capital One Arena. Phot

But this series against an opponent with more experience in postseason hockey — seven players remain from Washington’s 2018 Stanley Cup championship — has been another rough lesson for the Panthers about how to win the playoffs. Ill-advised penalties by top-pairing defenseman Mackenzie Weegar and Huberdeau paved the way for the power-play goals, a missed defensive assignment opened the door for Johansson’s and a turnover in the corner led to van Riemsdyk’s.

Similar mistakes cost Florida in the first round last year: a loss to Tampa Bay on the way to the Lightning’s second of back-to-back titles. Only this time, the Panthers were expected to make a deep run after compiling an NHL-best 122 points on 58 victories in 82 games.

If they don’t win three more over the next week, it’ll go down as another disappointment for a franchise that hasn’t advanced in the playoffs since 1996 and entered the postseason as one of the favorites to hoist the Cup. Defenseman Brandon Montour said the Panthers "weren’t really ready to play."

"It’s playoff hockey — it’s going to be tight," Monour said. "We’ve just got to play harder. That’s where it starts." 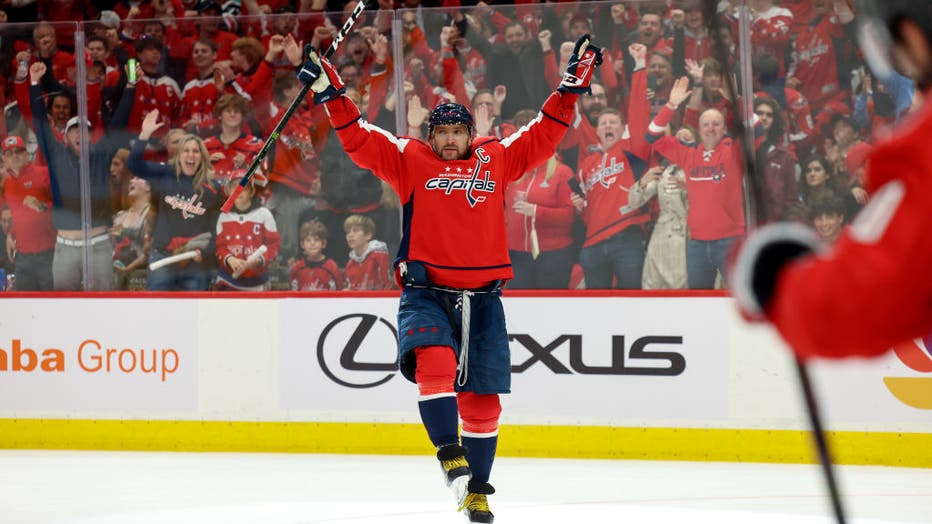 WASHINGTON, DC - MAY 7: Alex Ovechkin #8 of the Washington Capitals celebrates a goal against the Florida Panthers in Game Three of the First Round of the 2022 Stanley Cup Playoffs at Capital One Arena on May 7, 2022 in Washington, D.C. (Photo by Joh

The Eastern Conference eighth-seeded Capitals improved to 4 of 12 on the power play in the series. Their victory guaranteed at least two more home playoff games this spring, though Monday won’t be an easy one against the angry Panthers and Laviolette knows it.

"If we don’t follow it up, then that’s on us," he said. "It’s got to be pointed from right now. We’ve got to make sure that our mindset is knowing exactly where they’re at."