TAMPA, Fla. - From bedsides in the intensive care unit to the sidelines of Raymond James Stadium, a Tampa General Hospital critical care nurse is doing double-duty, working at the hospital and cheering for the Buccaneers.

"I take care of surgical patients mainly, from right when they leave the operating room to when they’re ready to leave the ICU," explained registered nurse Anastasia Lusnia.

The 23-year-old works at Tampa General Hospital in the vascular intensive care unit. She is not treating COVID-19 patients but says the pandemic has greatly affected healthcare. 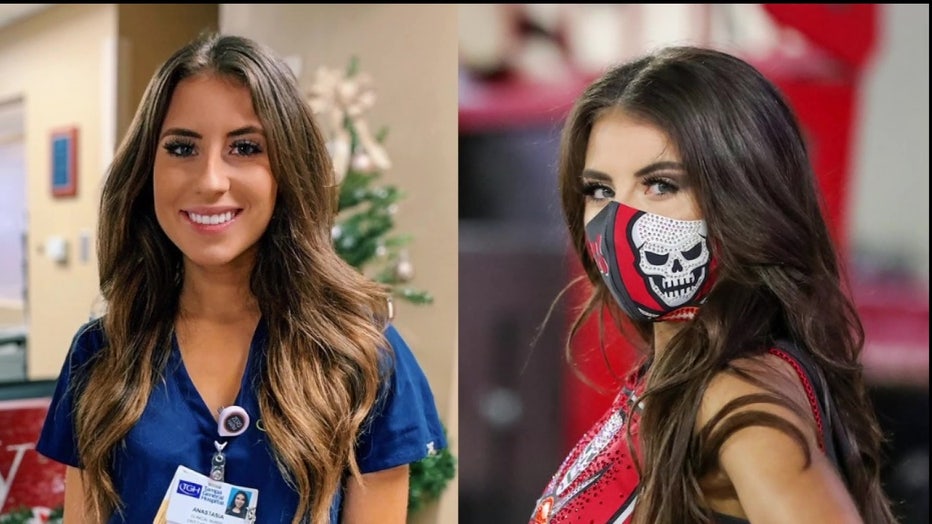 "It’s obviously been incredibly stressful for everyone involved, everyone that works here," Lusnia said.

Over the summer, Lusnia started splitting her time between the frontlines at TGH and the sidelines of Raymond James Stadium. She found out she made the Buccaneers cheerleading team after virtually auditioning back in May.

Now she wears a mask as part of both her uniforms but trades her PPE for pom-poms.

"I have danced since the age of three, so dance has always been my number one passion, performing has always been my favorite part about being a dancer," said Anastasia. "The adrenaline, the energy, nothing matches walking out into Raymond James Stadium."

Anastasia started her professional dancing in sports as a Lightning Girl for the 2018-2019 season, while she was still a student at the University of South Florida.

The Tampa Bay Buccaneers celebrated their Super Bowl win with a boat parade through downtown Tampa as thousands of fans watched on boats and on land.

Her first season with the Bucs turned into the experience of a lifetime. Lusnia says it was surreal being on the field for Super Bowl LV and watching our home team win the big game.

"And just knowing so many of my co-workers were there, the fact that the NFL honored 7,500 healthcare workers that were vaccinated to attend was just so special to me because I live in both of those worlds, so it kinda came full circle," she said.

Wednesday, Lusnia had a front-row seat to the celebrations in "Champa Bay," sailing with the cheerleaders and players in the victory boat parade.

"It’s just been a thrill to be able to be a part of all these special, exciting times," said Lusnia.

As for getting a Super Bowl ring, Lusnia has not heard anything yet. However, she says that would be amazing.