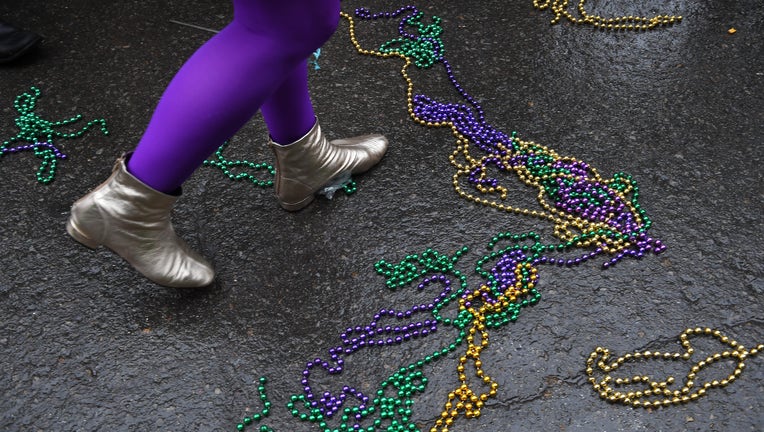 NEW ORLEANS, LA - FEBRUARY 17: A person walks among beads during the Krew of Cork parade on Friday February 17, 2017 in New Orleans, LA. The parade, which was part of the Mardi Gras festivities was wine themed. (Photo by Matt McClain/The Washington P

NEW ORLEANS - The former superintendent of the Louisiana State Police suffered minor injuries in a French Quarter scuffle the day before Mardi Gras.

WWL-TV reports one of Mike Edmonson's companions was hospitalized for head trauma.

Edmonson told the television station that he, along with Beaumont, Texas, attorney Stuart Yoes and Texas business owner Russell Allen were partying on Bourbon Street on Monday.

Allen told police that at least one of the men asked a woman to flash them in exchange for beads, prompting a man accompanying the woman to attack Yoes and Edmonson. A police report said Yoes was knocked to the ground, and Allen said Yoes was hospitalized for several days with brain bleeding.

"It was a devastating and unprovoked punch against a man who wasn't expecting it," Edmonson said. "Just horrible. Blood started pouring out immediately."

Yoes was released from the hospital on Friday and bound for Houston to see a neurologist, Edmonson said.

Robert Harris Jr. of Texas was arrested and jailed on counts of second-degree battery against Yoes and simple battery against Edmonson. The former state police leader suffered a cut near his eyes and minor scrapes but declined medical attention. A police report said Edmonson tried to "separate both parties during the verbal argument" but was hit when two other members of the woman's group entered the fray.

"I was just trying to calm things down," Edmonson said. "I'm still not sure why I grabbed the guy. I just didn't want anything worse to happen. I jumped in and the rest is a blur."

Harris, 51, was released after posting $4,500 bail, court records show. He is due in court on March 6 to respond to a motion by the district attorney's office to increase his bail. Harris could not be reached for comment.

After a 36-year career with the State Police, Edmonson retired as superintendent in 2017 amid criticism of his use of free lodging and other perks. Among those perks were directing hotel rooms meant for troopers to family and friends during Mardi Gras. The Louisiana Board of Ethics later reviewed the audit findings and found no criminal wrongdoing.