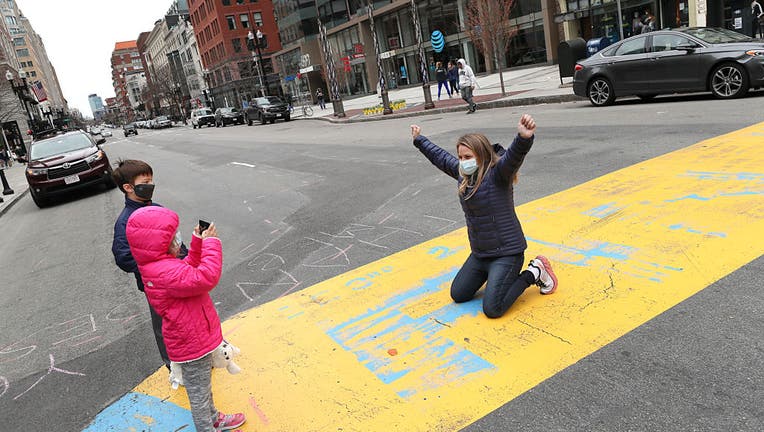 Lisa Wyman, a marathon runner who has run the Boston Marathon every year since 2002, has her photo taken at the finish line by her children Alex and Anderson, 5 and 7 years old, on what would have been Marathon Monday, April 20, 2020 on Boston's Boyl (Photo by Suzanne Kreiter/The Boston Globe via Getty Images)

BOSTON - The Boston Marathon has been canceled for the first time in its 124-year history.

Organizers have decided to have a “virtual event” instead, where participants who verify that they ran 26.2 miles on their own will receive their finisher’s medal.

The race had originally been scheduled for April 20 before being postponed for five months because of the coronavirus pandemic.

A deer unexpectedly joins two Missouri joggers on their run.

Although the title of Boston Marathon champion is contested by a few dozen elite athletes, the field includes more than 30,000 recreational and charity runners, with as many as 1 million people lined up along the course. That presented organizers with a social distancing problem they don’t expect to solve by the fall.

RELATED: Fauci: ‘We don’t have to accept’ 2nd wave of coronavirus as inevitable

The virtual event will allow participating runners who were originally registered for the race to complete the 26.2 mile distance within 6 hours, and they must provide proof of timing, according to race organizers. Registrants will also receive a refund for the money they paid to participate in the in-person race.

But the virtual race won't be the only interactive event that the organizers of the Boston Marathon will make available to prospective participants.

"The B.A.A. will offer a series of virtual events & activities throughout September’s Marathon Week to bring the Boston Marathon experience to the world. This will include exclusive panel discussions, champions interviews, and a downloadable toolkit with signature race elements," race organizers said in a tweet.