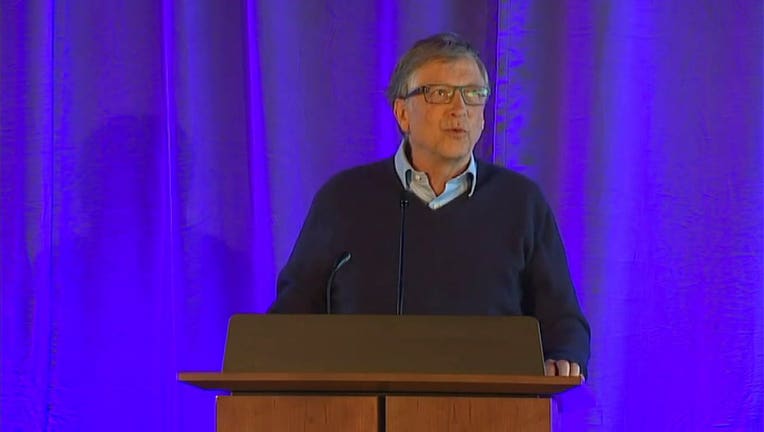 SEATTLE - Microsoft co-founder and philanthropist Bill Gates warned that there will be dire consequences if the world does not achieve zero net carbon emissions by the year 2050.

In his new book, "How to Avoid a Climate Disaster," Gates says that it is imperative that the world go from the current 51 billion tons of emissions to zero within the next 30 years to avoid catastrophe.

"The migration that we saw out of Syria for their civil war, which was somewhat weather dependent, we’re going to have 10 times as much migration because the equatorial areas will become unlivable," Gates told "Fox News Sunday" host Chris Wallace, warning what will happen if the goal is not reached. "We won't be able to farm or go outside during the summer. Wildfires, even the farming productivity in the south of the U.S. – the droughts – will reduce productivity in the area dramatically."

Gates went on to say that the loss of life would be greater than even the worst part of the coronavirus pandemic.

"The instability overall will be five times as many deaths at the peak of the pandemic and going up every year," he said.

While 2050 is Gates' cutoff point, he said this is really just a matter of "degree."

"If we wait 10 more years it's not as bad as if we wait 20 or we wait 30, because the temperature just keeps going up," he said. Gates said he is looking at 2050 because it "happens to be the soonest realistic date for the world to change all of these sorts of emissions."

Gates defended himself against criticisms from the left and right. Those on the left claim that he is not going far enough, and that he needs to support the Green New Deal, with efforts to reduce net emissions to zero by 2030.

"It's completely unrealistic," Gates said about the 2030 goal, saying that it will take at least 30 years to accomplish this.

Gates has also gotten flack for talking about the need to reduce emissions while he himself has a tremendous carbon footprint by living in a large home and flying on a private jet. He said his other actions make up for this.

"I am offsetting my carbon emissions by buying clean aviation fuel, and funding carbon capture and funding low-cost housing projects to use electricity instead of natural gas," Gates said. He noted how expensive these efforts have been and said those costs must be driven down.

Gates, an accomplished entrepreneur who created tens of thousands of jobs and established the U.S. as a leader in tech throughout the world, said that while a shift toward green energy will be necessary, it will result in significant job growth for engineers.

"The engineering skillsets, the things that those workers do will be important. In fact, we're going to have to almost triple the size of the electric grid and build all that transmission," Gates said. "And so it's not like there's going to be a shortage of jobs overall, it's just balancing to make sure that each community fits into the plan."

Gates also pushed back against a claim from Texas Gov. Greg Abbott, who said that the woes facing the state’s power grid during their winter storm is the result of failures of green energy, particularly wind.

"That’s not at all true," Gates said, saying that the power shortage was the result of the failure to weatherize power systems. He said that while wind turbines are part of this, it is possible to weatherize them, as evidenced by their use in North Dakota and Alaska.

For more, check out FOXBusiness.com.