BALTIMORE - When he was in the White House, Donald Trump referred to Baltimore as a "disgusting, rat and rodent infested mess." But for President Joe Biden, the city is the first stop Wednesday in what probably will be a national tour to showcase his agenda.

At the Port of Baltimore, Biden plans to lay out the benefits of the $1 trillion infrastructure package that Congress passed last week. The president intends to emphasize how the spending can strengthen global supply chains to help lower prices, reduce shortages and add union jobs, according to a White House official.

Biden plans to hold up Baltimore’s port as a blueprint on how to reduce shipping bottlenecks that have held back the economic recovery from the coronavirus pandemic. The infrastructure package includes $17 billion for upgrading ports — an urgent need as a backlog of ships waiting to dock at major transit hubs has fueled inflation and damaged public perceptions of Biden’s economic stewardship. 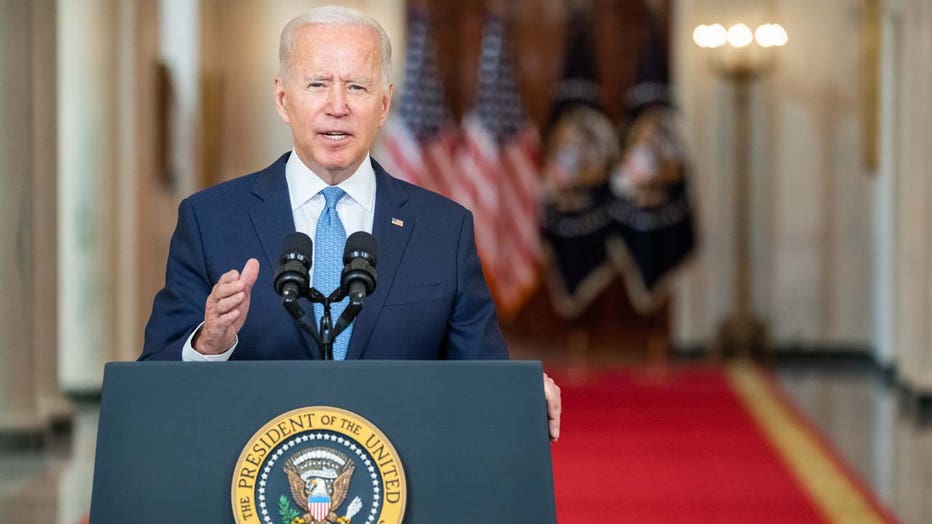 President Joe Biden delivers remarks on ending the war in Afghanistan, Tuesday, August 31, 2021, in front of the Cross Hall of the White House. (Official White House Photo by Adam Schultz)

The port in Baltimore is adding container cranes as well as a 50-foot berth where ships can be unloaded. Baltimore’s port is also benefiting from grants to upgrade the Howard Street Tunnel, a brick-lined underpass for trains that opened in 1895. The tunnel would be expanded so that shipping containers could be double-stacked on railcars, making it easier to move goods out of the port.

Biden, who consulted with the CEOs of Walmart, Target, FedEx and UPS on Tuesday, plans to emphasize that these investments are part of a national effort to relieve supply chain bottlenecks in ways that can aid broader growth.

The president has been trying to explain that the port congestion shows just how strong the economic rebound from the pandemic has been. A forecast by the National Retail Federation suggests a record level of imports this year. Yet the solid demand has produced shortages that have contributed to inflation, with prices in September up 5.4% from a year ago.

Nearly 90% of voters in Baltimore, Maryland’s largest city at 586,000 people, backed Biden in last year’s election. The president last stopped in the city for a CNN town hall on Oct. 21.

Baltimore embodies the complexities of an increasingly diverse America at a time of heated national politics.

Many Americans have seen the poverty, crime, political corruption and vacant row houses on TV shows such as HBO’s "The Wire." The unrest following the 2015 death of Freddie Gray from injuries in a police van helped to propel a national movement for respecting the rights and lives of Black Americans.

But Baltimore also contains deep pockets of wealth and prosperity in what is a microcosm of the broader inequality confronting the nation. There are the mansions of the Guilford neighborhood, elite private schools, celebrated restaurants and the prestige of Johns Hopkins University.

As president, Trump slammed the majority Black city on Twitter frequently, calling it "the WORST IN NATION." But while Trump scorned Baltimore, Biden sees a test case for his agenda that goes beyond the ports. His child tax credits are sending thousands of dollars to families in a city with a child poverty rate north of 30%. Work has begun to renovate and modernize the historic Penn Station, possibly improving rail transit across the Northeast.

A big part of Biden’s pitch is that he succeeded on a bipartisan infrastructure deal, whereas Trump failed.

Biden said Tuesday a virtual event hosted by the Democratic National Committee that Trump never delivered for the country’s cities and ports.