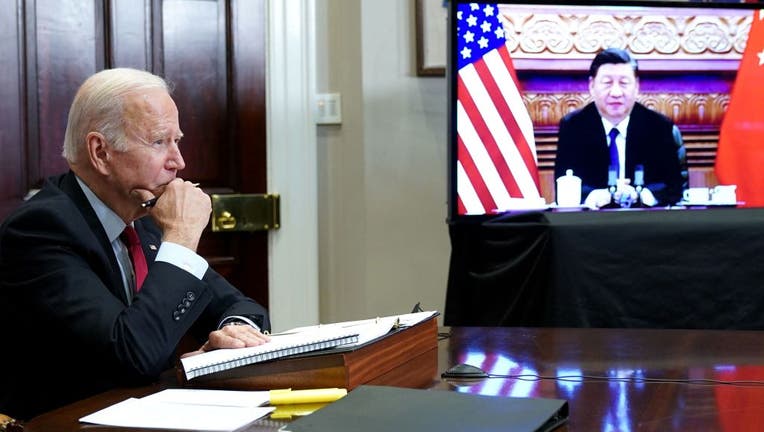 FILE IMAGE - President Joe Biden meets with China's President Xi Jinping during a virtual summit from the Roosevelt Room of the White House in Washington, D.C., on Nov. 15, 2021. (Photo by MANDEL NGAN/AFP via Getty Images)

WASHINGTON - Face to face by video, President Joe Biden laid out to Chinese President Xi Jinping on Friday the consequences the Chinese would face from the U.S. if they provide military or economic assistance for Russia’s invasion of Ukraine.

There was no indication he got any assurance in return.

China’s Foreign Ministry, in a readout after the nearly two-hour conversation, deplored "conflict and confrontation" as "not in anyone’s interest," but assigned no blame to Russia and said nothing of next steps.

"China has to make a decision for themselves, about where they want to stand and how they want the history books to look at them and view their actions," White House press secretary Jen Psaki said.

She declined to detail possible consequences Biden specified to the Chinese president if his country provides support for the Russian invasion.

But a senior administration official who briefed reporters following the leaders' call said that Biden pointed to the economic isolation that Russia has faced — including economy-battering sanctions and major Western corporations suspending operations — as he sought to underscore the costs that China might suffer.

Ahead of the call, Psaki noted Beijing’s "rhetorical support" of Putin and an "absence of denunciation" of Russia’s invasion.

The two leaders also discussed the longer-simmering U.S.-China dispute over Taiwan. In a reminder of China’s threat to assert its claim by force, the Chinese aircraft carrier Shandong sailed through the Taiwan Strait on Friday, just hours before the Biden-Xi call. The U.S. is legally obligated to ensure the self-governing island democracy can defend itself and treats threats to it with "grave concern."

Russia is entering its fourth week of attack Ukraine as the death toll and destruction continues to rise. Secretary of State Antony Blinken gave new details about the conflict, including how Russia is setting the stage to use a chemical weapon and then falsely blame Ukraine to create a false narrative and justify use of even more deadly force. Blinken said Russian President Vladimir Putin is also kidnapping local officials and replacing them with puppets and this action will continue to escalate.

Planning for the leaders' discussion had been in the works since Biden and Xi held a virtual summit in November, but differences between Washington and Beijing over Russian President Vladimir Putin's prosecution of his three-week-old war against Ukraine were at the center of Friday's conversation.

China noted its calls for negotiations and its donations of humanitarian aid for Ukraine, while accusing the U.S. of provoking Russia and fueling the conflict by shipping arms to Ukraine. Xi also renewed China’s criticism of sanctions imposed on Russia over the invasion, according to State media. As in the past, Xi did not use the terms war or invasion to describe Russia’s actions.

"As leaders of major countries, we need to consider properly resolving global hotspot issues and, more importantly, global stability and the production and life of billions of people," he was quoted as saying.

The U.S.-China relationship, long fraught, has only become more strained since the start of Biden's presidency. Biden has repeatedly criticized China for military provocations against Taiwan, human rights abuses against ethnic minorities and efforts to squelch pro-democracy advocates in Hong Kong.

But the relationship may have reached a new low with the Russian invasion.

In the days after Putin deployed Russian forces in Ukraine, Xi’s government tried to distance itself from Russia’s offensive but avoided the criticism many other nations have leveled at Moscow. At other moments, Beijing’s actions have been provocative including amplifying unverified Russian claims that Ukraine ran chemical and biological weapons labs with U.S. support.

President Biden delivered his own address following Zelenskyy’s speech to Congress, in which he announced an additional $800 million in security assistance to Ukraine.

Earlier this week, the U.S. informed Asian and European allies that American intelligence had determined that China had signaled to Russia that it would be willing to provide both military support for the campaign in Ukraine and financial backing to help stave off the impact of severe sanctions imposed by the West.

The White House says China has been sending mixed messages. There were initial signs that Chinese state-owned banks were pulling back from financing Russian activities, according to a senior Biden administration official who insisted on anonymity to discuss internal analyses. But there have also been public comments by Chinese officials who expressed support for Russia being a strategic partner.

Ahead of the Rome talks, Sullivan said the U.S. wouldn't abide China or any other country helping Russia work around economy-jarring sanctions inflicted by the U.S. and other allies since the Feb. 24 invasion.

Sullivan also said the administration determined China knew that Putin "was planning something" before the invasion of Ukraine, but the Chinese government "may not have understood the full extent" of what Putin had in mind.

Xi and Putin met in early February, weeks before the invasion, with the Russian leader traveling to Beijing for the start of the Winter Olympics. The two leaders issued a 5,000-word statement declaring limitless "friendship."

Beijing's leaders would like to be supportive of Russia, but they also recognize how badly the Russian military action is going as an overmatched Ukrainian military has put up stiff resistance, according to a Western official familiar with current intelligence assessments.

The official, who was not authorized to comment and spoke on the condition of anonymity, said Beijing is weighing the potential "reputational blowback" of being associated with the Russian camp. The Chinese response to Russia’s request for help is still being formulated, the official said.

From the early morning, Kharkiv is under heavy shelling as thousands were forced to flee the city. Maria Avdeeva has documented the destruction in her city and explains the continued lies from President Putin to the Russian people.

Though seen as siding with Russia, China has also reached out to Ukraine, with its ambassador to the country on Monday quoted as saying: "China is a friendly country for the Ukrainian people. As an ambassador, I can responsibly say that China will forever be a good force for Ukraine, both economically and politically."

"We have seen how great the unity of the Ukrainian people is, and that means its strength," Fan Xianrong was quoted by Ukraine’s state news service Ukrinform as telling regional authorities in the western city of Lviv, where the Chinese Embassy has relocated to.

State media quoted Xi as saying China-U.S. relations had yet to "emerge from the dilemma created by the previous U.S. administration, but instead encountered more and more challenges," singling out Taiwan as one area in particular.

"If the Taiwan issue is not handled properly, it will have an undermining impact on the relationship between the two countries," Xi reportedly told Biden.