The Biden administration on Thursday said it would immediately begin turning away Cubans, Haitians, and Nicaraguans who cross the U.S.-Mexico border illegally, a major expansion of an existing effort to stop Venezuelans attempting to enter the U.S.

HEBRON, Ky. - President Joe Biden said Wednesday he intends to visit the U.S.-Mexico border — his first since taking office — in connection with his meeting next week in Mexico City with the leaders of Mexico and Canada.

"That’s my intention, we’re working out the details now," Biden told reporters during a trip to Kentucky.

Biden said upon his return to the White House that he hoped to see "what’s going on" at the border and also planned to make remarks about border security on Thursday.

There have been large increases in the number of migrants at the border even as a U.S. public health law remains in place that allows American authorities to turn away many people seeking asylum in the United States. Republican leaders have criticized the president for policies that they say are ineffective on border security and they have questioned why he has not made a trip there yet.

Immigration will be among the top talking points at the summit Monday and Tuesday when Biden and Canadian Prime Minister Justin Trudeau are hosted by Mexico President Andres Manuel Lopez Obrador.

Biden intends to make his first visit to US-Mexico border

Early in his presidency, Biden put Vice President Kamala Harris in charge of the White House effort to tackle the migration challenge at the border and work with Central American nations to address central causes of the problem. She visited El Paso, Texas, in June 2021 and was criticized for choosing a location too far from the epicenter of border crossings that straining federal resources.

For now, the Supreme Court has for now kept in place Trump-era restrictions, often known as Title 42 in reference to a 1944 public health law, after Biden acted to end them and Republicans sued in response. Title 42 was invoked to prevent the spread of COVID-19, but there always has been criticism that the restrictions were used as a pretext by then-President Donald Trump to seal off the border.

The Biden administration has yet to lay out any systemic changes to manage an expected surge of migrants should the restrictions end. In Congress, a bipartisan immigration bill was buried shortly before Republicans assumed control of the House.

MORE: Latest on the shipping containers at the Arizona-Mexico border

Biden made his comment about the upcoming visit during a stop in Kentucky at a highway bridge that is receiving federal dollars under the bipartisan infrastructure law.

Trump visited the U.S. side of the border as president several times, including one trip to McAllen, Texas, where he claimed Mexico would pay for the border wall.

American taxpayers ended up covering the costs. Mexican leaders had flatly rejected the idea when Trump pressed them early on. "NO," Enrique Peña Nieto, then Mexico’s president, tweeted in May 2018. "Mexico will NEVER pay for a wall. Not now, not ever. Sincerely, Mexico (all of us)." 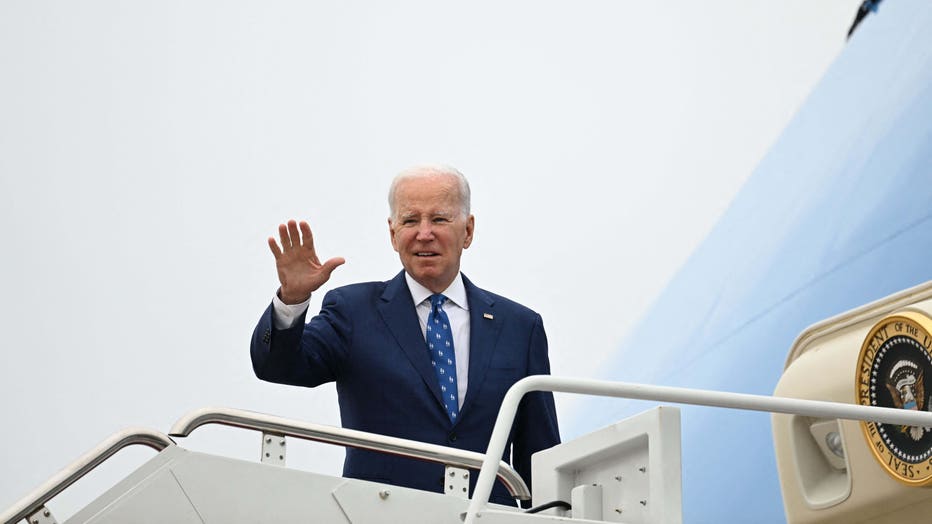 US President Joe Biden boards Air Force One at Joint Base Andrews in Maryland on January 4, 2023. - The President travels to Covington, Kentucky. (Photo by JIM WATSON/AFP via Getty Images)