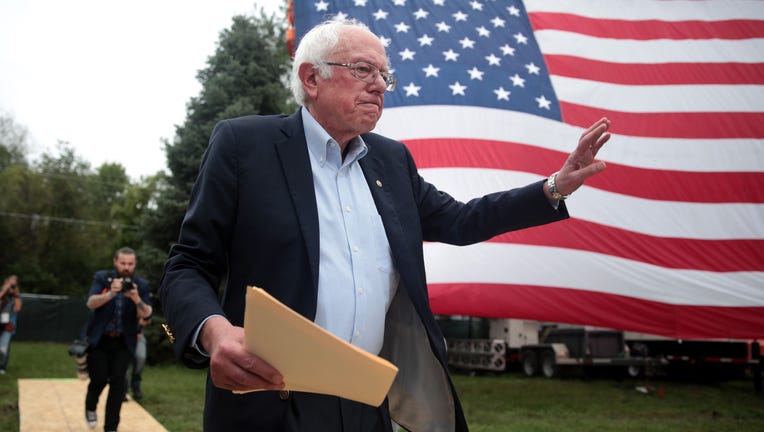 Senator Bernie Sanders (I-VT) is calling on House Democrats and Republicans to return to Capitol Hill to make sure the U.S. Postal Service is "fully funded" and to remove Postmaster General Louis Dejoy.

"I think the House should come back and make sure that the U.S. Postal Service is fully funded," Sanders told ABC This Week's George Stephanopoulos. "I think we've got to do everything we can to get rid of this new Postmaster General who is clearly a campaign contributor for Trump trying to undermine the postal service."

He also blasted President Trump for blaming the stalemate over coronavirus stimulus negotiations and funding for the Post Office on Democrats.

"Three months ago, the Democratic House of Representatives passed a Heroes bill which would fund the post office, make sure that workers in this country continue to get $600 supplement to their unemployment insurance, if they're unemployed get at least $1200, and provide massive help to cities and states," Sanders said. "To say that the Democrats are not working on behalf of working people or not funding the post office is another lie from Donald Trump."

He argued that both Senate Majority Leader Mitch McConnell and President Trump have had the opportunity to be involved in stimulus talks and have chosen not to.

"Democrats sat down, Mitch McConell did not participate in the negotiations. You have Donald Trump, any day could invite Democrats and Republicans to the White House. He didn't," Sanders said. "Their job was to stymie and make sure there were no agreements because half of the Republicans in the United States Senate do not want to contribute another nickel to American workers' help during this crisis. That's the reality."

He also accused Trump of trying to "undermine American democracy by defunding the postal service," arguing that the American people "should not have to put their lives on the line, and get sick and maybe die, in order to cast a vote."

"Trump apparently believes that a low turnout will work for him and he wants to discourage people from voting, from mail-in ballots because he thinks it will work to his favor," Sanders said. "That is pathetic, that is not what a president of the United States should be doing."

Sanders implored the American people to stand up to the president and Republicans and demand they keep USPS going to keep the integrity of the election intact.

"Whether you are a progressive, a moderate, or a conservative, this goes beyond political ideology," Sanders said. "This goes to the fact of whether or not we are a democracy or will continue to have a president who tries to make it impossible for people to vote, and I hope in a very resounding way, the American people say "Sorry Mr. President, people fought and died for American democracy, you're not going to destroy it."

The comments from Sanders come as the House Oversight Commitee has requested Dejoy appear on Capitol Hill to testify in a hearing examinig his "sweeping operational and organizational changes at the Postal Service" which the committee believes could "degrade delivery standards, slow the mail, and potentially impair the rights of eligible Americans to cast their votes through the mail in the upcoming November elections."

“Over the past several weeks, there have been startling new revelations about the scope and gravity of operational changes you are implementing at hundreds of postal facilities without consulting adequately with Congress, the Postal Regulatory Commission, or the Board of Governors,” Chairwoman Carolyn Maloney wrote.  “Your testimony is particularly urgent given the troubling influx of reports of widespread delays at postal facilities across the country—as well as President Trump’s explicit admission last week that he has been blocking critical coronavirus funding for the Postal Service in order to impair mail-in voting efforts for the upcoming elections in November.”

The hearing is scheduled to take place at 10 a.m Eastern time on August 24.